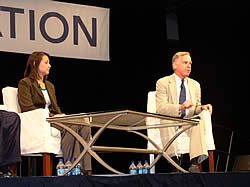 August 14, 2009, 8:40 a.m. CST: Dr. Dean is speaking live.  This story will be updated as the presentation continues. Refresh your screen to get updates.

“You could’ve knocked me over with a feather. The American Medical Association has endorsed Henry Waxman’s bill,” Dean said, adding, “Doctors are not dumb. They’ve figured out they’re better with real health care reform.”

“When we frame this debat, I don’t think we want to spend all our time refuting [death panels, etc.].  They’re not going to change their mind anyhow.  The question is, are we going to give the American people the option to have a full choice?  That’s the first part.  Second, whose side are you on?  Are you with the insurance companies, or are you with the people who pay your salaries?”

“The public option is still much better at controlling costs, and it’s cheaper.  Medicare already has a 16% advantage over the market.  We’re paying for [high risk] patients anyway.  We’re paying for these people anyway.  That money is already in the system.”

Should small business be exempted entirely?  “I do.  As I’ve said before, this is an opportunity to do something for the sector that creates 80% of the new jobs.  I would make this more friendly for small businesses than even the Blue Dogs did.”

“Mandates are not very popular, which is why I’m against the Republicans mandating everyone to stay with the health insurance industry. I would give everyone under 30 health insurance for free.  This is the hardest group to sign up for anything.  Then, for the over 55s, I’d let them buy into medicare.”

“I would not do away with employer-based insurance.  It’s bad for the economy, but people like it.  I think you need to give the American people a choice.  Insure everyone under 30, let everyone else buy into Medicare.”

“80% of the people in this country have insurance.  We ought to let people choose on their own.  This president has put forth the best health care bill I’ve seen,” because it allows the American people to go at the pace the American people are comfortable with.

“I have been very careful to not criticize any Democatic senator.  I think in the end we’re going to get them all,” Dean said. “I think we can be polite, but I think we need to be firm.  We have made our compromise.  There will be no more compromise.”

There are over 2,000 people attending the convention in Pittsburgh’s David L. Lawrence Convention Center. Dr. Dean concluded his town forum at 9:13 a.m.