Washington, D.C.–(ENEWSPF)– Right-wing media figures have mocked Democrats’ descriptions of hardships faced by their constituents who lack health insurance, including a story Rep. Louise Slaughter told about a woman who wore dentures that previously belonged to her dead sister. For example, Rush Limbaugh said, "So if you don’t have any teeth, so what? What’s applesauce for?"

Limbaugh: "What’s wrong with using a dead person’s teeth? Aren’t the Democrats big into recycling?" Responding to Slaughter’s account, which he called the "sob story of the day, Limbaugh stated:

LIMBAUGH: You know I’m getting so many people — this Louise Slaughter comment on the dentures? I’m getting so many people — this is big. I mean, that gets a one-time mention for a laugh, but there are people out there that think this is huge because it’s so stupid. I mean, for example, well, what’s wrong with using a dead person’s teeth? Aren’t the Democrats big into recycling? Save the planet? And so what? So if you don’t have any teeth, so what? What’s applesauce for? Isn’t that why they make applesauce?

Limbaugh previously told a caller who could not afford the $6,000 it would cost to treat a broken wrist that he "shouldn’t have broken [his] wrist."

Beck sidekick uses baby voice to mock letters Obama receives. On Beck’s February 25 radio show, co-host Steve "Stu" Burguiere stated that Obama "gets 10 letters, Glenn, every night." Co-host Pat Gray asked, "From 2-year-old girls?" Then, one of the co-hosts started speaking in a baby’s voice: "I have no health care, Mr. Pwesident, and I have no feet and no tonsils because doctors took ’em out."

Conservative blogger Pamela Geller linked to an audio clip of the segment, which she wrote was "[d]a best! the funniest thang evuh!"

Ingraham: "Louise Slaughter won the Olympics of sob stories." On Fox News’ The O’Reilly Factor, radio host Laura Ingraham said she "liked the dueling sob stories, OK? One Democrat was trying to outdo the next on the sob story about how rotten our health care system is. Louise Slaughter won the Olympics of sob stories by saying one of her constituents had to wear her sister’s dentures. OK? It got so bad with the health care system." She later added, "You had Harry Reid on the cleft palate with his — I mean, the whole thing was ridiculous." 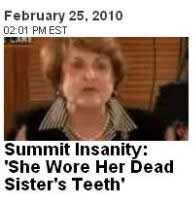