It turns out that’s what kicked off the right-wing blogosphere’s comically inept misinformation campaign last weekend to try to swell the size of Saturday’s anti-Obama protest in the nation’s capital, to jack the crowd size up to the wildly inflated — and erroneous — number of 2 million people.

According to estimates provided by the Washington, D.C., fire department, Malkin and friends were only off by 1,930,000 people. In other words, Malkin, citing fictitious press accounts, led the charge to falsely inflate the size of the crowd by 30 times. Malkin and company, desperate to dress up the tea party event as a mass movement, saw a relatively modest crowd of 70,000 GOP protesters and imagined it was 2 million strong. (She’s a dreamer, I suppose.)

Worse, Malkin spent most of Saturday in denial, refusing to update her transparently false report, which meant the rest of the right-wing blogosphere also played dumb on a massive scale and kept excitedly repeating the manufactured claim. The scary part is that within the fact-free conservative blogosphere, lots of people still believe the 2 million nonsense, or are at least repeating it. They believe it despite the fact that nobody can point to any evidence to support it.

For most sane observers, what transpired over the weekend resembled a comical bout of telephone tag — the game schoolchildren play when they whisper something into a friend’s ear and then get a big laugh when, six or seven friends later, they hear how distorted the original message has become via garbled repetition. (Two million protesters!) The sad part is that right-wing bloggers are serious. They think they’re engaging in some bold new era of citizen journalism. Instead, they just, you know, make stuff up.

It’s just the latest example in a string of unforgettable whoppers from online conservatives who rarely let the facts get in the way of a good story. And, yes, irony abounds in that right-wing bloggers hate the press and that they hate the practice of journalism. They lecture reporters about accountability and fairness all the time, yet whenever amateur conservatives try their hand at reporting, they just produce guffaws for the rest of us. (Did I mention they miscalculated the size of the crowd by 1,930,000 people?)

On Saturday, facts didn’t matter because right-wing ringleader Malkin was helping to spread a sprawling (and illogical) lie, and her dutiful followers knew just what to do: spread it hard and fast. Perhaps Malkin’s only regret was she didn’t aim higher; she could have claimed there were news reports of 12 million people protesting in D.C., and I’m sure every one of her willingly gullible devotees would have linked to her.

The amusing part of the weekend’s blind-leading-the-blind charade was that Malkin already has a very long and detailed history of manufacturing phony stories that later leave nasty stains all over the blogosphere when they turn out to be turds. (Paging Jamil Hussein.) And that’s what I think was so revealing about the 2 million-people-in-D.C. fiasco: Nobody within the right-wing blogosphere seems to be the slightest bit upset, let alone embarrassed or chastened, for having been part of a farcical, inept attempt to inflate the size of Saturday’s rally by 1,930,000 people. Nobody seems to think it reflects poorly on them as a community, or that it will damage their collective reputation.

They really are shameless. And they really do inhabit their own parallel political universe where everyone’s allergic to facts.

Why the shamelessness? Sadly, members of the GOP Noise Machine are acutely aware there is no downside to just lying 24/7. Malkin knows that no TV producers are going to deny her an on-air spot because she purposefully spread the patently phony claim that 2 million people gathered in Washington, D.C. (i.e. that the city’s population quadrupled overnight). The Beltway press rarely holds the Noise Machine accountable, so of course they’re going to just keep lying (what’s the downside?), since it’s obvious they don’t really care about facts to begin with.

The conservative comedy of errors began on Saturday when Matt Kibbe, president of FreedomWorks, took to the rally stage and unfurled a massive lie. He told the crowd ABC News had reported that between 1 million to 1.5 million people had gathered to protest Obama’s policies. (Later, a FreedomWorks flack conceded she had no idea know why Kibbe manufactured the claim about ABC News.)

Seven minutes later, Malkin re-tweeted Hale’s claim. Then, one minute after that, Malkin turned that tweet into part of her ongoing protest coverage. Intrepid "reporter" Malkin took an unsupported tweet and reported it as news:

Note that in her blog post there were no links for Malkin’s utterly fantastic claim, no place on the Web where readers could go and confirm that D.C. police had pegged the crowd at 1.2 million or that ABC had made the staggering claim of 2 million. The lack of live links should have been a massive red flag for readers and fellow bloggers, especially when it was associated with such a controversial and news-breaking claim.

But, of course, Malkin had no links or any real facts to go on. All she had was a couple of tweets from Hale, who, in retrospect, appeared to have spent much of Saturday just making shit up.

But again, none of that mattered, because Malkin had spoken (2 million!) and the right-wing bloggers knew what to do. Let’s take a stroll through the far-right blogosphere and see which sites did their best to spread Malkin’s patently absurd claim about 2 million protesters. [Emphasis added.]

I can remember telling Glenn Reynolds during CPAC that these Tea Party demonstrations were rinky-dink and going nowhere. Barely more than a half-year later, they’re putting two million people on the Washington Mall. Wow!

Looking at the Left:

ABC News reports that two million Americans flooded D.C. in what people in the crowd were calling "a conservative Woodstock" Like the liberal Woodstock of the ’60s, thousands were rumored stranded on freeways.

The two photos above show a tiny fraction of the two million ABC estimates attended.

NewsBusters, the day after the 2 million people story had been debunked:

You’ll note no mention of the D.C. rally yesterday that drew an estimated 1-2 million people.

Michelle Malkin reported on her site that ABC News estimated the crowd to be 2 million people.

Rick at Brutally Honest linked to this awesome time lapse video showing progression of the approximately 2 million people who marched in DC today:

And then there was the sad, confused work of blogger Stephen Green. Doing his best to spread the word about the supposedly massive crowd size on Saturday, Green first claimed that CNN had reported the crowd was 2 million strong. (CNN never did any such thing.) Then later under a banner that read "correction," Green, following Malkin’s phony lead, reported it was ABC News that reported 2 million protesters were on hand. (Green then failed to correct his "correction.")

Of course, the 2 million tally never made sense. Not only couldn’t anybody find ABC’s alleged reporting, but no other news organization (not even rally co-sponsor Fox News) were going anywhere near the 2 million mark. Instead, most of Saturday’s reports used phrases like "tens of thousands" to describe the crowd size.

By the end of that 4 o’clock hour, ABC’s News’ Yunji de Nies also weighed in: 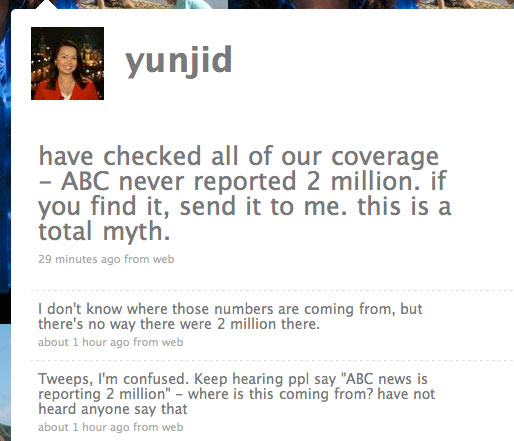 Later that afternoon, ABC News took the unusual step of reporting an article about itself. Headlined "ABC News Was Misquoted on Crowd Size," the dispatch, designed solely to knock down the false rumor that Malkin helped hype, was quite emphatic:

At no time did ABC News, or its affiliates, report a number anywhere near as large. ABCNews.com reported an approximate figure of 60,000 to 70,000 protesters, attributed to the Washington, D.C., fire department. In its reports, ABC News Radio described the crowd as "tens of thousands."

Finally, near day’s end, Malkin finally addressed her bogus ABC News claim and pointed the finger of blame at FreedomWorks’ Kibbe. (He’s the one who first mentioned ABC News.) Malkin then thanked ABC News for "clearing this up," without noting that "this" was launched when Malkin broadcast a completely fictitious claim without the slightest hint of attribution and then waited most of the day to acknowledge her colossal blunder. And note that Malkin blamed Kibbe because Kibbe told the rally that ABC News had estimated the crowd to be between 1 million and 1.5 million. But Malkin told the world ABC News had claimed it was 2 million. So how was that Kibbe’s fault?

Post-protest, some conservatives, such as Instapundit, still tried to push the phony 2 million claim by clinging to a typically awful and unsubstantiated article from the British press that originally suggested "up to two million people" marched on Washington. The article, though, lacked any sourcing. It was just another case of the British press regurgitating a right-wing lie. (The article was later changed to include an equally misleading claim: "As many as one million people flooded into Washington for a massive rally.")

By Saturday night, RedState blogger Erick Erickson, conceding the 2 million number was pure fantasy, did his best to clear up the confusion:

I’ve been talking all night to people who are there and involved. The 2 million number was generated by the media, but truly seems to be a gross inflation of what is there.

And with that we traveled full circle in the unstable world of the right-wing blogosphere. According to press-hating Erickson, it was the media that concocted the wildly inflated 2 million number. (ABC News again?) In the new, sanitized telling, Malkin’s dirty hands, of course, had been completely washed and her leading role in the embarrassing charade had been forgotten and forgiven. Because at the end of the day, it was the media’s fault all along.