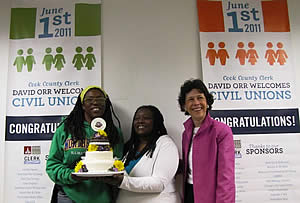 Most couples arrived before the clerk’s downtown office opened at 7:30 a.m., but a steady stream of couples applied for civil unions until the doors closed at 7 p.m. A few dozen couples visited the clerk’s suburban offices; at least two of the couples were heterosexual.

The first civil union license was issued to Janean Watkins and Lakeesha Harris of Chicago, who arrived at midnight to be the first couple in line at the Daley Center.

"Today, the engine of government says that we will move towards justice, towards fairness, towards equal protection under the law," said Metropolitan Water Reclamation District Commissioner Debra Shore, who attended the civil union kickoff this morning.

Watch a video of this morning’s celebration below.

"This is a day long in the making. Congratulations to the happy couples!" said Clerk Orr, who is on assignment in Macedonia as an election monitor.

Harris and Watkins, who have six children and have been together more than a decade, were emotional after receiving their license. Watkins expressed gratitude and relief after "all of the hours of toiling over, ‘How are we going to make sure people understand our family?’"

Pam Voss and Melody Fairchild started dating 13 years ago. "It’s nice to finally have your relationship validated," Voss said. "There are certain protections people just don’t realize they have."

Qadree and Troy Holmes, who have been together for six years, met at a barbeque Qadree hosted. Although the couple had a wedding ceremony in 2007 at their church, they were grateful to Rep. Harris, Governor Quinn and the Illinois Legislature for the opportunity to have a civil union.

James Darby, 79, and Patrick Bova, 73, of Chicago’s Hyde Park, have been a couple for nearly a half century. Darby said, "I’ve been dating for 47 years; it’s finally going to be legitimate!" Bova replied, "We’re now aiming for marriage." Darby and Bova were the oldest couple, and the youngest were Elena Denise Cano, 21, and Jannett Lopez, 20.

Diane Martino and Tina Kachold, together 15 years, were also in line before dawn to receive their civil union license. "This shows great evolution in the state of Illinois, for heterosexuals as well," said Martino.

Because Watkins and Harris were first in line to receive their civil union license, they received a gift package from several sponsors, including: a two-night stay at the Palmer House Hilton; free Eli’s Cheesecake each anniversary for the rest of their lives; a $100 gift certificate to Wilde Bar & Restaurant; a Starbelly Studios photo shoot with three complimentary prints; a $100 Downtown Bar & Lounge gift certificate; and a $50 LaSalle Flowers gift certificate.

More than 80 other "presents" were donated and raffled off at a reception hosted by the Clerk’s office. Grand prize winners Jef Johnson and Allen Nichols received a 2-hour party cruse from Chicago’s First Lady Cruises, which includes complimentary wine and beer as well as a gift basket with champagne, chocolate and more (valued at $2,500). Other prize donations included the following:

The celebration of the first Civil Union in Cook County.