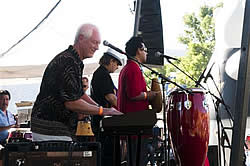 Park Forest, IL–(ENEWSPF)– On April 10, Abraxas will be in concert at Freedom Hall in Park Forest at 8 pm. Abraxas performs a stunning musical tribute to the great Carlos Santana. Having performed for millions of fans over the past 5 years, Abraxas is widely recognized as the #1 Santana tribute band in the world.

In 1969 Carlos Santana burst onto the music scene with a searing performance at Woodstock. This innovative combination of electric blues-rock guitar and Afro-Cuban rhythms fills the music with heart, soul and a burning sensuality; 40 years and 40+ albums later, Santana is still a powerful and inspirational musical force.

Inspired by the incredible intensity of his music, the members of Abraxas share a passion for recreating the electrifying sounds of Carlos Santana. Audiences, without exception, have been awed by the authentic Santana sound that Abraxas delivers during their stunning shows. With Abraxas, it’s all there: the propulsive Latin percussion, the fiery lead guitar work, the “groove” that connects to the soul of the audience. Their play list is full of old favorites, as well as recent hits from “Supernatural”, "All That I Am" and "Ultimate Santana".

Comprised of a group of seven world class musicians that have performed in the US and internationally, Abraxas recreates the Santana experience in exquisite detail. This hand-picked group of musicians immerse themselves in the awesome task of replicating Santana’s music with stunning accuracy, spirit and soul. The members of Abraxas have recorded and toured with many different world class acts, and it shows when they perform their tribute to Santana. Abraxas understands the intricacies and variety of Santana’s Latin rhythms, from the Cha Cha of "Oye Como Va", the soulful Latin Funk of "É Papa Ré" to the Son Montuno of "Corazón Espinado". No other Santana tribute band plays them as authentically as does Abraxas.

Widely recognized as America’s #1 Santana Tribute Band, Abraxas was chosen to perform as Santana at the December 2007 concert "Woodstock Revisited" in Buffalo, NY, performing along with other world class tribute bands, and is a mainstay at Woodstock Festivals across the nation. Abraxas also headlined the Woodstock Tribute Concert in Woodstock, IL on August 14, 2009, the 40th anniversary (to the day) of the original Woodstock. Awards have included winning the “Rock Star Energy Drink" tribute band competition in 2008, and winning a world-wide Santana Tribute Band competition out of 21 bands.

Tickets for the Abraxas concert are $23 and can be purchased at Freedom Hall, 410 Lakewood Boulevard, Park Forest, IL . For more information call the Freedom Hall box office at 708/747-0580 or visit the website at www.freedomhall.org.