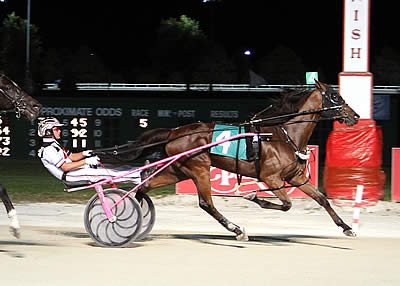 Crete, IL-(ENEWSPF)- The 2011 American National Stakes kicked off on Saturday night at Balmoral Park with a pair of six-figure events for diagonally gaited three-year-olds.

With a purse of $121,500 on the line a full field of 10 sophomore trotting fillies lined up in race four. Making amends for a tardy start and a fifth place finish in the Hambletonian Oaks in her last start Reve Avec Moi Dreamtime and Jerry &Theresa Silva’s Iron Lady took full advantage of the inside starting spot as she trotted to a 1 ½ length triumph in a snappy 1:54.1, which was just a tick off the track standard for a three-year-old trotting filly.

Perfectly handled by Hall of Famer Dave Magee the daughter of Taurus Dream-Ita Di Jesolo sped away from post position one and was in control of the proceedings as she hit the quarter-mile mark in 28.4.

“I don’t know what happened to her in the Oaks,” said Magee. “Tonight she was completely focused and she really wanted to race so I just let her do what she wanted, which was to roll right on out of there.”

After getting pressure down the backside from stablemate Crys Dream (Jean Dubois) Magee finally wrestled his filly back allowing the even-money favorite Crys Dream to grab command as the field moved past the half-mile in 57.0.

Sitting in the pocket the rest of the way Magee patiently waited for room as Crys Dream led the field by the three-quarter-mile mark in 1:26.1.

“Even though she was ready to roll right from the start I also had no problem getting her to relax once we wound up in the pocket,” said Magee. “She was so good out there tonight I could have driven her with two fingers.”

Moving into the passing lane Magee had Iron Lady in high gear as the Jean Dubois trainee uncorked a big 27.4 final quarter to hold off a late bid from Lady Rainbow (Rick Zeron). Crys Dream held on to finish third.

The $113,000 American National for three-year-old colts was up next and this race turned into a showcase for the Illinois breeding program as Kay Willis, the Brandy Pinske Stable and John Esposito’s GJ Photo Victory survived a stewards inquiry to post a 1 ¼ length triumph in 1:56.1 for driver Marcus Miller.

After getting away in fourth as Ax Man (Rick Zeron) zipped to the top driver Marcus Miller decided to get underway just as the field hit the opening station in a pedestrian 29.2.

“Things were starting to slow down up front as we moved down the backside so I figured I better get my horse out rolling so we didn’t get all jammed up in there,” explained Miller.

Grinding his way towards the front GJ Photo Victory finally grabbed command just before the halfway point, leading the field past that point in 57.3.

“We had a pretty stiff wind in our face which made getting to the lead a little tougher than I thought it would be,” said Miller. “This horse is very tough though and he just continued to dig away and it wound up working out perfectly that we cleared when we did because it left that other horse (Swan In A Million) out there without cover going into the turn.”

Moving around the final bend disaster struck for Swan In A Million (Todd Warren) as the colt made a break while battling GJ Photo Victory tooth and nail for the lead. That left GJ Photo Victory alone on a two-length lead as he trotted by the three-quarter-mile mark in 1:26.4.

Opening up a 3 ½ length lead by the mid-stretch call the Nelson Willis trained son of Photo Color-Victoria Coe was on cruise control the rest of the way as he reported home with a 1 ¼ length decision to make it three straight victories here in the Prairie State. Whit (Jimmy Whitemore) rallied to finish second while Valiant Warrior (Brian Carpenter) finished third, four lengths behind the winner.

The win was the fifth in 12 starts this year for GJ Photo Victory who also sports four second place finishes and one third place finish with earnings of $119,799. In the winners circle an emotional Willis was quick to praise both horse and driver after the big victory.