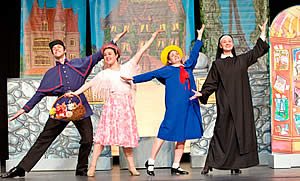 Madeline and the Bad Hat is coming to Freedom Hall. (PHOTO SUPPLIED)

Park Forest, IL-(ENEWSPF)- ArtsPower National Touring Theatre, one of the nation’s preeminent producers of professional theatre for young and family audiences, is delighted to bring the national touring musical of Ludwig Bemelmans’ Madeline and the Bad Hat to Freedom Hall in Park Forest, IL. The performance(s) will take place at 7 p.m. on Friday, February 18, 2011. The show runs approximately an hour in length.

The third in the Madeline series, ArtsPower’s Madeline and the Bad Hat focuses on the unbreakable bonds of friendship and family. Madeline is none too pleased when Pepito, the son of the Spanish ambassador, moves in next door. He seems insufferably arrogant and conceited. And worst of all, he’s cruel to animals.

Under the guidance of Miss Clavel, the caretaker of the girls at Madeline’s boarding school, Madeline learns not to judge a book by its cover. She discovers that Pepito’s father is rarely at home and that this new neighbor is misbehaving because he is desperate for attention.

Pepito and Madeline become friends after she resourcefully rescues him from danger, and consequently, Pepito and his father also grow closer. It turns out that even an old-fashioned aristocratic gentleman can show great affection, and that Pepito isn’t such a bad hat after all.

Madeline is in that important ‘discovery’ phase of her life, when the types of challenges and conflicts she faces are important to resolve. The timeless charm of Bemelmans’ Madeline story is quite relevant to young children, who are forever seeking ways to handle such problems. The stage is a wonderful venue for such lessons.

Madeline and the Bad Hat was adapted for the stage by ArtsPower’s artistic director Greg Gunning, who also wrote the lyrics and directed the production. Composer/orchestrator Richard DeRosa created the original Broadway-style score.

Identical twins Mark and Gary Blackman founded ArtsPower in 1985 and have been steering its course ever since. Its 26 original, professional touring productions have been seen by more than 11 million people in 47 states – from Alaska to Florida – in some of the nation’s top regional theatres, university auditoriums, and cultural centers, including The Kennedy Center in Washington, DC and Lincoln Center in New York.

Tickets for “Madeline and the Bad Hat” are $7 and can be purchased at Freedom Hall, 410 Lakewood Boulevard, Park Forest, IL. For more information call the Freedom Hall box office at 708/747-0580 or visit the website at www.freedomhall.org .