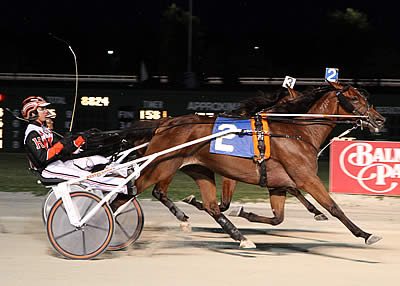 Crete, IL-(ENEWSPF)- Hanover Stakes action continued on Wednesday night at Balmoral Park as a compact field of five three-year-old filly trotter’s squared off in a $24,500 event.

Splitting horses in the final sixteenth of a mile Ron Marino & David Hermann’s Fox Valley Ruffian came flying through the lane to win by a half-length in a career best of 1:58.1.

Unleashing a wicked 27.3 final quarter the Randy Tuftie trained daughter of Vaporize-Reina Bella finally secured racing room with less than a sixteenth of a mile to go. Gobbling up a tiring leader Fox Valley Ruffian charged right on by to notch her second win in nine starts this season. Always Yours held on for second while Caviar’s Delight (Robert Taylor) finished third.

State-bred trotting colts were also on display on Wednesday night as an overflow field of 12 diagonally gaited youngsters met in the $7,000 Psychic Spirit Stake.

Coming off a win in the Million Dollar Bye Stake in his career debut Douglas Ricoolo’s Monticello Lane remained unbeaten as he romped to a seven length victory in a career best of 1:59.2 for driver Brian Carpenter.

Managing to steer clear of the many breakers and the horses in the second tier Carpenter did a nice job of getting the gelded son of Northern Kid-Blizzard Lane to the front from post position eight.

Electing to give his charge a breather after trotting an opening quarter in 30.3, Carpenter allowed a hard charging Tuff Guy JJ (Mike Brink) to grab command as the field raced to the half-mile station in 1:00.0.

Quickly popping out of the pocket as the field trotted around the bend Monticello Lane quickly swept back into command, opening up a two-length lead as the field reached the three-quarter-mile mark in 1:30.3.

In command of the proceedings from that point on the Robert Taylor trainee proceeded to widen his lead the rest of the way home while under no urging whatsoever from his pilot.  Riccolo, who had the great Walter Paisley in the bike, overcame traffic problems in the first turn thanks in part to his starting spot in the second tier and several breaking horses to rally for the place check while Fox Valley Steffen (Kyle Wilfong) was a distant third.