Casey Driessen and the Colorfools in Concert at Freedom Hall 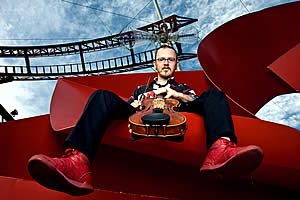 Park Forest, IL–(ENEWSPF)– With a Grammy nomination and years of solo touring under his belt, inventive genre-warping fiddler Casey Driessen and his band The Colorfools will be in concert at Freedom Hall in Park Forest, IL on Saturday, February 19, at 8 p.m.

Fiddler Casey Driessen is a restless explorer—a bold boundary and genre crosser who listens for inspiration from Tennessee to Tibet. An early diet of bluegrass, jazz, and western swing fastened to Driessen a respect for tradition; an education at Berklee College of Music burst open the door to technology, music from around the globe, and introduced him to The Funk. This exposure to rich musical diversity created Driessen’s distinct and soulful approach to the fiddle, and led to collaborations with artists such as Béla Fleck, Bassekou Kouyate, Tim O’Brien, Darrell Scott, Steve Earle, Abigail Washburn (as a member of The Sparrow Quartet) and Zac Brown Band.

Driessen’s signature style of funky fiddle rhythm is quickly earning him the reputation as the leader of "The Chop," a new percussive bow technique permeating every corner of the fiddle/violin world. A choptastic interpretation of "Jerusalem Ridge" from his debut album,3D, earned him a GRAMMY nomination and was hailed a "tour de force" by The New York Times. A frequent collaborator and sideman to some of the top national and touring acts today, Driessen’s live performances and studio recordings as a solo artist are what truly highlights his "monster chops and imagination to match" (Downbeat). With an electric stage and studio presence, his abilities as a worldly instrumentalist and composer illustrates not merely a fast and inventive fiddler, but a visionary who translates his passion for tradition and improvisation into groundbreaking new American music. And although you can’t hear them (or can you?), you can rest assured he’s wearing red shoes.

Tickets for this concert are $20 and can be purchased at Freedom Hall, 410 Lakewood Boulevard, Park Forest, IL.  Series package discounts are available. For more information call the Freedom Hall box office at 708/747-0580 or visit the website at www.freedomhall.org.