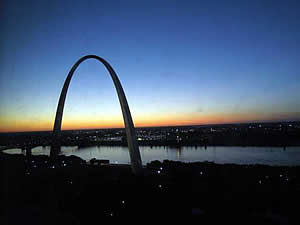 This beautiful photograph of the St. Louis Arch courtesy LCWR.

St. Louis, MO-(ENEWSPF)- At the annual assembly of the Leadership Conference of Women Religious (LCWR) held in St. Louis, MO, August 7-10, the more than 900 participants planned their response to the doctrinal assessment of the organization by the Vatican’s Congregation for the Doctrine of the Faith (CDF).

As the meeting took place, participants were reminded of the thousands of people throughout the country and the world who had been communicating with LCWR since the CDF report was issued April 18, urging that the response be one that helps to reconcile the differences that exist within the Catholic Church and creates spaces for honest and open conversation on the critical moral and ethical questions that face the global community. Since receiving the CDF report, the LCWR officers made efforts to hear the voices of as many of its 1500 members as possible by inviting them into processes of prayerful consideration of the report’s findings and recommendations. Members then gathered in regional meetings throughout the country to share their insights, which became the basis for the conversations that took place at this assembly, which was the first gathering of the majority of its members since the CDF report was issued.

Utilizing a three-day process of sustained prayer and dialogue, the assembly participants considered various responses to the CDF report, with the goal of deciding together on next best steps for the conference following the assembly. Recognizing that this is a time of historic challenge for the church and for LCWR, the participants expressed the hope of maintaining LCWR’s official role representing US women religious in the Catholic Church. While acknowledging deep disappointment with the CDF report, the members proclaimed their intention to use this opportunity to explain to church leaders LCWR’s mission, values, and operating principles.

The members charged the LCWR officers with beginning a conversation with Archbishop J. Peter Sartain, the apostolic delegate appointed by CDF to oversee LCWR. Their expectation is that open and honest dialogue may lead not only to increasing understanding between the church leadership and women religious, but also to creating more possibilities for the laity and, particularly for women, to have a voice in the church.

The assembly articulated its belief that religious life, as it is lived by the women religious who comprise LCWR, is an authentic expression of this life that must not be compromised. The theology, ecclesiology, and spirituality of the Second Vatican Council serve as the foundation of this form of religious life – and while those who live it must always be open to conversion – this life form should not be discounted.

The assembly instructed the LCWR officers to conduct their conversation with Archbishop Sartain from a stance of deep prayer that values mutual respect, careful listening and open dialogue. The officers will proceed with these discussions as long as possible, but will reconsider if LCWR is forced to compromise the integrity of its mission. The members reiterated the importance and value of LCWR’s mission to its members and its role as a voice for justice in the world. They urged the officers not to allow the work with CDF to absorb the time, energy, and resources of the conference nor to let it distract the conference from the work its mission requires.

Also during the assembly, Barbara Marx Hubbard, a futurist and author, spoke on consciousness evolution where she noted that the very crises humanity is facing on a global scale require exercise of a higher level of ethical, shared commitment and social synergy to realize positive change. She observed that the crises are potential signals driving the world toward more cocreative, coevolving humanity, where people become more fully aware of their potential for healing and evolving the world in new ways, new forms and ever expanding relationships.

Thomas C. Fox; Sister Jennifer Gordon, SCL; and Jamie Manson served as panelists, offering the assembly ideas for how religious life might evolve as it moves into the future. In her address to the assembly, LCWR president Sister Pat Farrell, OSF suggested six tools for navigating the shifts occurring in the world and church. These tools included contemplation, use of the prophetic voice, solidarity with the marginalized, community, nonviolent responses, and the capacity to live in joyful hope.

The members passed a resolution calling on Congress to pass the Dream Act and comprehensive immigration reform that includes the reunification of families and a path to citizenship for undocumented immigrants living in the United States. In addition, the resolution opposes the passage and call for the repeal of restrictive state laws that create a climate of fear in immigrant communities. They passed a second resolution that committed them to work for the abolition of human trafficking, calling it a form of modern day slavery. The assembly once again provided participants an opportunity to reflect on injustice and to effect change. “Human Trafficking: Stolen People, Stolen Hope,” a panel presentation developed by LCWR members from Region 10, offered participants an opportunity to learn more about human trafficking and those working to abolish the scourge and heal the wounds. Panelists Kimberly Ritter of Nix Conference and Meeting Management, Katie Rhoads, MSW of Healing Action Network and Sister Kathleen Coll, SSJ convener of the Human Trafficking Group of the Interfaith Center on Corporate Responsibility (ICCR) shared the stories of their work and called the assembly to action.

At the conclusion of the assembly, Sister Florence Deacon of the Sisters of St. Francis of Assisi in Wisconsin assumed the office of LCWR president for 2012-2013 after the members voted in Sister Carol Zinn of Sisters of St. Joseph of Chestnut Hill, Pennsylvania as the conference president-elect; and Sister Barbara Blesse of the Dominican Sisters of Springfield as conference secretary.

The assembly closed with the conferring of LCWR’s highest honor, its Outstanding Leadership Award, on Sister Sandra Schneiders, IHM, a theologian and professor emerita at the Jesuit School of Theology in Berkeley, California.

LCWR has nearly 1500 members who are elected leaders of their religious orders, representing approximately 57,000 Catholic sisters. The conference develops leadership, promotes collaboration within church and society, and serves as a voice for systemic change.