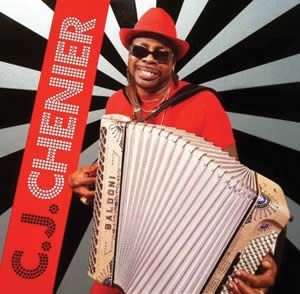 C.J. Chenier talks a lot about energy. Ask him why he recorded a certain song and he’ll tell you he likes the energy of it. Why does he love Zydeco music? It’s the energy!

C.J., son of the ‘King of Zydeco’ Clifton Chenier, joined his father’s Red-Hot Louisiana Band playing saxophone at the age of 21. After Clifton’s death in 1987, C.J. picked up the accordion and took charge of his father’s ministry – to spread the word of Zydeco music to the world. Since then, Chenier has pushed the genre to new heights with his virtuosity. The Boston Globe has called him "the crown prince of Zydeco," and Living Blues magazine hails him as "the best living zydeco singer and accordionist." His musical style ranges from the traditional Zydeco of Clifton Chenier right on up to modern funk with healthy doses of blues, R&B, swamp pop and even country. C.J.’s total mastery of the accordion combined with his rich, satisfying voice are the driving forces behind this power-house Zydeco band.

"The heir to the Zydeco throne, an unparalleled party starter"  — Billboard

Tickets for C.J. Chenier and the Red Hot Louisiana Band are$24and can be purchased at Freedom Hall, or by the phone at 708/747-0580, or on-line by visiting the website at www.freedomhall.org

If you would like more information about the Freedom Hall Series, please call Chuck Sabey at 708/503-8258 or e-mail Chuck at [email protected]