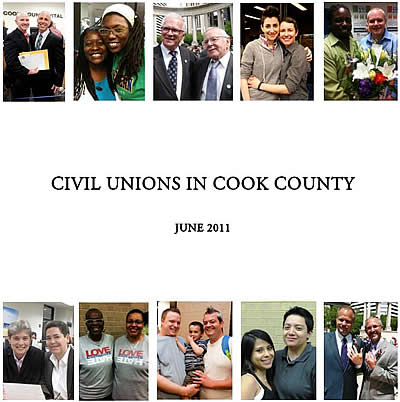 Clerk David Orr’s June 2011 report on civil unions in Illinois is available here, or by clicking on the image above. (PHOTO SUPPLIED)

"It’s thrilling to see so many happy couples getting licenses and celebrating their relationships," Orr said. "My office is dedicated to making this milestone special for each and every couple."

June 1 was by far the busiest day with 209 licenses issued. From June 2-30, an average of 30 licenses was issued daily.

The breakdown of couples by gender shows more female couples, 428 or 51.5 percent, obtained a license than male couples, 357 or 43 percent. Forty-six opposite-sex couples, or 5.5 percent, applied for a license.

The oldest person applying for a civil union license was 93. There were 34 couples with at least one partner age 70 or older, and 29 of those couples were male. The youngest permissible age is 18, and only one 18-year-old applicant was recorded.

Couples applying for civil union licenses appear to be more highly educated than average. More than half of all couples had at least one college graduate. Many more have at least one partner with an advanced degree or doctorate. According to the 2000 census, 28 percent of Cook County residents were college graduates.

After a couple obtains a civil union license, they must use it within 60 days and their officiant must then return it to the county clerk. Of the licenses returned, 77 percent had civil ceremonies and 23 percent had a religious ceremony.

About 20 percent of the couples had previously been registered on Cook County’s Domestic Partnership Registry, which began in 2003 and had grown to nearly 2,000 couples.

In addition to the 831 licenses issued in June, 125 couples obtained civil union licenses through Friday, July 15.

This data is available thanks to a new system for civil union licensing developed in-house by the Clerk’s programming staff. Next, the system will be adopted for marriage licensing. The Clerk’s office will continue to track demographic trends of couples in civil unions and report the findings periodically.

Click here for a full copy of the Civil Unions in Cook County, June 2011 report.