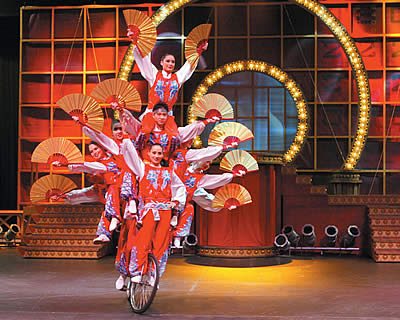 Celebrate the Chinese New Year with the Golden Dragons, recognized throughout the United States and abroad as the premier Chinese acrobatic touring company.

During the show at the GSU Center, the Golden Dragons – 27 performers from China’s Hebei province – will bend like rubber, spin umbrellas with their feet, scale poles like cats, lean at 45 degree angles, and build human pyramids on moving bicycles. With nerves of steel, Golden Dragon Acrobats are athletes, actors, and artists who have trained since childhood, and who now amaze audiences all around the world.

“The impossible can be achieved, and once achieved, surpassed, then surpassed again,” the Associated Press reported after witnessing the Golden Dragons. The New York Times commented on the performers’ total lack of fear “as they form human totems and balance on perilous-looking stacks of ladders that lean like the Tower of Pisa.”

The 2011-2012 tour marks the 34th year of continuous touring in the United States for the Golden Dragon Acrobats. With the company’s main office based in Dallas, the Golden Dragons have traveled around the world to all 50 states and to over 65 countries on five continents. Members of the current touring company have performed before sold-out audiences in nearly every major market in the country. The Golden Dragon troupe had its Broadway debut at the New Victory Theatre in 2005, and was nominated for two Drama Desk Awards for its performance.

The Golden Dragons are committed to the highest production values and an unparalleled attention to artistic details. By exhibiting their remarkable strength and agility, the Golden Dragon Acrobats keep age-old culture and traditions alive, and give audience members an experience they’ll never forget.

Single tickets to the Golden Dragon Acrobats performance are $15 to $44 for adults and $15 to $41 for children 16 and under. For subscription and single ticket information call GSU Center’s friendly Box Office staff at (708) 235-2222 or visit www.centertickets.net. GSU Center is located at 1 University Parkway (Governors Highway and University Parkway), 45 minutes south of the Loop, off I-57 at Sauk Trail. Parking is free.

Patrons who purchase single, regular price tickets for three or more shows (Mainstage, cabaret, opera and/or Especially for Kids series) in GSU Center’s 2011-2012 season will receive a $10 gift certificate to be used for future ticket purchases. Limit one voucher per household, and additional restrictions may apply.