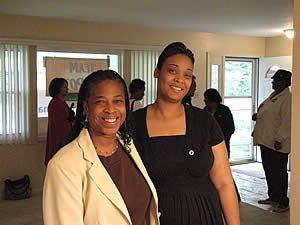 Park Forest, IL-(ENEWSPF)- Two families have homes in Park Forest, and Habitat for Humanity and scores of volunteers are to thank.

In a morning of festivities that began Saturdayin morning in Village Hall, Sarah Hendrickson and Jacqueline Holmes were officially welcomed to their new homes.

According to Habitat for Humanity, Sarah Hendrickson has been widowed since 1998. After the loss of her husband, she was unable to sustain her lifestyle and eventually purchased a mobile home. The mobile home, desperately in need of repair, had a leaking roof, mold, and was infested with rodents.

Sarah now has a home on Blackhawk Drive and is "grateful for this opportunity to partner with Habitat and thankful for the support of the many volunteers, committee members, and workers who helped her obtain the dream of home ownership," according to a statement from Habitat for Humanity.

Jacqueline Holmes has two sons, Ronnie, 9, and Dontrell, age 7. She works full time as an RNA and CNA at Prairie Manor nursing rehabilitation center. She is also a full-time student. She has been part of the "Habitat family" since April of 2010, the organization says, helping greet customers in the ReStore in Chicago Heights. Her family’s home is on New Salem.

Friends and family members, representatives from Habitat for Humanity, members of the Park Forest Village Board, and volunteers from Home Depot gathered for the celebration.

After celebrations at Village Hall, during which each family received symbolic gifts of a plant, a key holder, bread, wine and a bible, car caravans traveled to each refurbished home for dedication ceremonies.

"I am very elated. I’m happy." Jacqueline told eNews Park Forest. "It’s been a long process, it’s been an experience I will never forget, working with others, hours on my home, and to see the finished product, I am so happy."