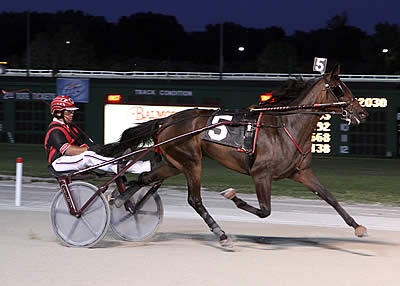 Colts and geldings were featured in the first event of the night as a field of nine met in the $53,500 Plesac Stake. As is usually the case with these lightly raced young trotters it’s survival of the fittest and that’s exactly what this race turned into as Kent Schenk and Taylor & Dixon Racing’s Mucho Bueno went charging by his rivals in the lane to win by 2 ¼ lengths in 2:00.1.

Well handled by Robert Taylor the son on Band’s Gold Chip-Fox Valley Shiraz was able to avoid confusion in the first turn as three of the youngsters, including stablemate Monticello Lane and 1-5 favorite Riccolo all went off stride.

Trotting along in fifth as Star On Ice (Ridge Warren) opened up a huge 10 length advantage while putting up splits of 28.3 & 58.3 Taylor wasn’t the least bit worried about the 14 ½ length gap that was staring him in the face.

“I wasn’t worried about being able to catch that horse that was on the lead because he had never shown that kind of mile on his lines,” said Taylor. “Once I saw the times come up on the track timers I was pretty sure that he was going to come back to us and my horse was just going along effortlessly at that point.”

Moving to the outside on the far turn Mucho Bueno began to cut into the margin as a leg weary Star On Ice led by just four lengths as he passed the three-quarter-mile mark in 1:30.4.

Quickly swallowed up by a first over Fox Valley Steffen (Dale Hiteman) Star On Ice put up the white flag. Moving with long fluid strides on the outside of horses after tipping four wide at the top of the lane the Kevin Dixon trained Mucho Bueno blew right by that colt while opening up a two-length advantage. On cruise control the rest of the way Mucho Bueno was hand driven to the wire as he scored for the first time in three career starts. Psychic Express (Marcus Miller) came through the passing lane to get the second place check while Commander Dan (Art Gregory Jr.) rallied to be third. Unfortunately a break by that colt right at the wire wound up costing him a position as he was set back to fourth for a violation of the breaking rule. That moved Fox Valley Steffen up to third.

After the win Taylor seemed quite pleased by the effort his young trotter had turned in.

“He made a break in his last start and had been off for three weeks since then,” said Taylor. “That was simply because he was a bit green. We used the time away to school him behind the gate a few times and things worked out well and he was really strong all the way through the wire for me tonight.”

Freshmen trotting fillies hit the track for the next event as a field of nine lined up behind the gate for the $54,500 Fox Valley Flan Stake.

Taking advantage of a perfect trip and four breaking horses Arthur Reynolds and Jodi Peacock’s Rubys And Pearls popped out of the pocket with an eighth of a mile to go and trotted her way to an easy 3 ¼ length victory in a 2:00.4 for trainer-driver Richard Schrock.

Leaving alertly Shrock managed to avoid the first turn confusion by keeping his filly towards the center of the track as Fox Valley Velvet (Marcus Miller) and Wallstreet Darling (Dale Hiteman) battled through an opening quarter in 31.1.

Shortly after taking a short lead on the backstretch Wallstreet Darling went off stride allowing Schrock to land in the garden spot for the remainder of the mile.

“That’s the way it goes with these young trotters,” said Schrock. “I kind of kept my filly a little wide just in case something like that happened. You have to worry about your own horse but you’ve also got be very aware of everything that is going on around you with the other horses.”

Positioned perfectly in the garden spot Rubys And Pearls was right on the back of Fox Valley Velvet as she proceeded to trot through middle splits of 1:01.1 & 1:31.2.

Fit and fresh with an eighth of a mile to go the daughter of daughter of Vaporize-Reggae Ruby moved to the outside where she quickly trotted right by a tiring Fox Valley Velvet for her first win in four lifetime starts. R Little Felicia (Robert Taylor) shook loose late to finish second while Fox Valley Velvet held on for third.

Although she was winless in her first three starts Shrock still had plenty of confidence in his filly going to into Wednesday’s race.

“She trained down like a good horse all winter long and she’s just had some bad luck through her first three starts,” said Schrock. “She drew the 9-hole twice and 8-hole once in her first three starts and those posts left us with to much ground to make up. She wound up hitting the board in all three of those starts and tonight we finally drew well which allowed us to find a good early spot which turned out to be the key.”