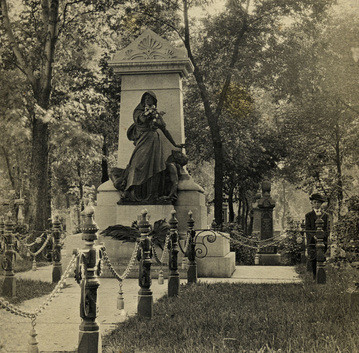 Forest Park, IL–(ENEWSPF)–April 10, 2017. The Historical Society of Forest Park will celebrate the 136th anniversary of Chicago’s Haymarket Affair with a special Anarchist / Labor “Picnic at the Pub” Sunday, April 30 — a short walk from the world-renowned Haymarket Martyrs Monument in Forest Home Cemetery.

As a kick-off to celebrations of International May Day, the Historical Society of Forest Park will present a Sunday afternoon of food, history, music and fun at McGaffer’s Saloon, 7737 Roosevelt Road, Forest Park, from 11 a.m. -3 p.m.

For 125 years, “labor pilgrims” from all over the world have visited the beautiful Haymarket Martyrs monument in Forest Home Cemetery, a short walk from the Forest Park Blue Line CTA stop. Near the monument is “Radical Row” the final resting place of Anarchist Emma Goldman and many other labor and anarchist rabble-rousers and hell-raisers.

The “Picnic at the Pub” at McGaffer’s Saloon, will feature a meal of German sausages and sauerkraut, (as well as vegan options) and a cash bar, along with historical displays of the Haymarket Martyrs, information tables from Chicago-area worker and immigrant rights groups, “Anarchist BINGO,” a book table, and live sing-alongs of labor and German and American drinking songs.

Tickets are $15 and available here.

The Haymarket Martyrs monument in Forest Home Cemetery, Forest Park, marks the burial site of the eight men tried and sentenced to death for the 1884 “Haymarket Incident” in which seven Chicago Police officers and at least four workers died. Six defendants were hanged in 1887, and two were sentenced to prison terms. In 1893, all eight were posthumously pardoned by Illinois Gov. John Altgeld who declared they had an unfair trial. The Haymarket Martyrs Monument is cared for by the Illinois Labor History Society. HSFP will also be at the Haymarket Monument April 30th and May 1st giving tours and sharing information about the iconic Haymarket Monument and Radical Row

The Historical Society of Forest Park

Founded in 1975, the Historical Society of Forest Park is dedicated to collecting and preserving the rich heritage of Forest Park.

Previous articleChicago Jews to Use Rituals of Passover Seder to Protest Trump’s Anti-Immigrant, Anti-Muslim, and Anti-Refugee Policies
Next articleOn Monday, April 17 Sierra Club to Discuss How Donald Trump Threatens Environment and What You Can Do to Stop Him