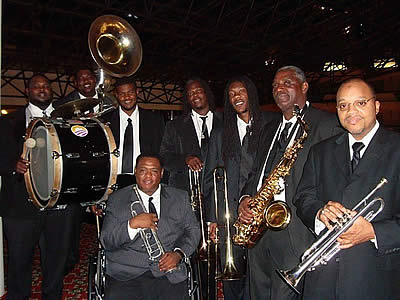 Founded by Bennie Pete, Jerome Jones, and Harry Cook in 1995, the band has played in traditional Second Line parades hosted each Sunday by a Social Aid and Pleasure Club ever since. The Hot 8 are famous for playing all day in the sun, then hopping to a club gig and playing through the night. But even more than their boundless energy, what makes the Hot 8 special are the sounds they coax from their well-loved, well-worn horns.

It was not until after Hurricane Katrina, however, that Hot 8 became known nationwide. Featured on CNN, Nightline, in the New York Times, and most notably in Spike Lee’s Katrina documentary “When the Levees Broke: A Requiem in Four Acts”, Hot 8’s work with the Finding Our Folk Tour has brought music to evacuee shelters, temporary trailer parks, and to communities throughout the US that have provided a temporary home to displaced New Orleanians.

The Hot 8 Brass Band, like all of New Orleans, has had its share of tragedy in the aftermath of Katrina. In addition to displacement caused by the storm and subsequent violence and uncertainty contained therein, drummer Dinerral Shavers was shot and killed in late 2006 while driving with his wife and child in New Orleans. In addition, two other members of the band have lost their lives due to violence on the city streets. In response to these tragic setbacks, The Hot 8 Brass Band has recommitted itself to bringing people together through their unique brand of music to celebrate, to heal and to learn. This passion for music and social outreach led to an integral role contributing to the success of the Finding Our Folk Tour.

Tickets for the performance are $28 and can be purchased at Freedom Hall, 410 Lakewood Boulevard, Park Forest, IL .  For more information call the Freedom Hall box office at 708/747-0580 or visit the website at www.freedomhall.org .