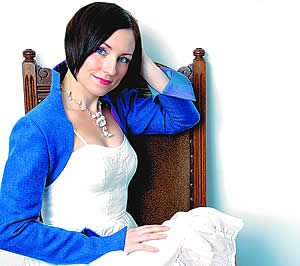 Park Forest, IL-(ENEWSPF)- You might recognize Julie Fowlis from Disney-Pixar film "Brave”, or as a performer at the Ryder Cup, or you may have seen her featured on a few PBS specials. It is little wonder that when Disney-Pixar were searching for the perfect, authentic singing voice to feature for “Brave”, their animated film set in the ancient highlands of Scotland, their research led them to one of the Western Isles’ true contemporary treasures – Julie Fowlis.

Brought up on North Uist in Scotland’s Outer Hebrides, Julie Fowlis has been a proud standard bearer for Gaelic music and culture over the course of a solo career which has spanned three highly acclaimed studio albums.

Julie has contributed to several BBC programs in her capacity as an artist and researcher in Gaelic song. She also co-presented the acclaimed BBC Radio 2 Folk Awards live from the Lowry, Manchester

Julie Fowlis has received several awards including "Gaelic Singer Of The Year", "Album Of The Year" at the Scots Trad Music Awards, and "BBC Radio 2 Folk Singer of the Year". She is most proud of her award as Scotland’s Gaelic Ambassador – "Tosgaire na Gàidhlig", bestowed by the Scottish Parliament in 2008, the first person to ever receive this honour.

Concert tickets are $28, Students/Children $14, and available by calling the Freedom Hall box office at 708-747-0580 or by going online at www.freedomhall.org.