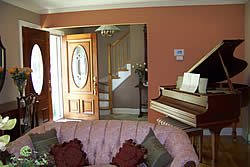 Park Forest, IL–(ENEWSPF)– The 26th Park Forest House Tour, sponsored by the League of Women Voters of the Park Forest Area and the Village of Park Forest will be held Sunday, June 6th from noon until 5p.m. Four homes will be featured with the theme “Looking Good at 60: An Afternoon of Ideas.”

Started by the League 27 years ago, the tour has tried to show what can be done to renew, renovate, rehab, decorate, or adapt the village housing stock to meet the changing needs of current or potential residents, according to League members. Barbara Moore, retired Director of Community Relations in Park Forest, was one of the original planners of the event, and has been one of the organizers of it for over 26 years. She has seen the tour evolve over the years but still considers it has a basic purpose to help those in Park Forest stay, come back, or gather affordable ideas for their own homes. Various features highlight each home and emphasize ideas that anyone can apply, Moore said. Each home will have volunteers to greet visitors and tell the features that make the homes special, she added.

Three of this year’s homes are revisits to homes that have been featured in previous house tours but have been further modified, redecorated or updated. The fourth home shows what can be done “on a shoestring” to transform it from a dark, uninviting house into a home that welcomes the visitor into a calm, comfortable and pleasing atmosphere.

Two of the homes not only feature the interior but also emphasize the “park” and “forest” that the village name reflects. One home nestles up against a forest preserve where the deer roam (ask the owners about their “deer-resistant” plantings) and where the owners can sit on the deck to read or just enjoy the woods. Another home looks out into Central Park and was remodeled and opened up to take advantage of the view.

The cooperative on the tour uses light colors, a wall of mirrors, an archway, and cream-colored carpet to give it a feeling of spaciousness. The upstairs bathroom has been completely gutted and refinished. The bedrooms reflect the owner’s mother’s care and decorating talent with one furnished for a niece. The sleigh bed in the other bedroom looks too good to sleep in. An antique curio cabinet and sewing machine grace the living room with a teardrop chandelier highlights the dining area.

What’s behind the red door in the house next to the woods? A home that is open, functional and features the artistic talent of an owner greets the visitor. From the time 26 years ago when the current owners bought the house until today there have been major and minor changes that show what can be done with a basic house without structural changes. Pictures of the various stages through which the house has gone tell the story. There is a contemporary feel to the house but there are also items that go back in years such as the bed that belonged to the owner when she was growing up and was an antique then. The function of several of the rooms has changed as shown in the room that houses the owner’s quilting materials and sewing equipment.

It was only in 2006 that the owners bought a two-story house in the Lincolnwood area of Park Forest but the transformation from dark and dreary to what it is today is amazing. Dark paneling, everything old, ill-kept, depressing is how the “before” was characterized by the owners. In the last four years the kitchen has been opened up and redone, all windows have been replaced, and second-hand stores, thrift sales, etc have been scoured to find the right furniture and accessories. With a small budget and determination the house has become a home that is the epitome of what can be done. The bedrooms feature Ralph Lauren themes but are less expensive than one might think. A huge poster bed beckons in one bedroom and throughout the house there are items that have a story behind them.

The fourth house has been on the tour before but many things have been done since and are being done to further enhance its appeal. What started out as a basic 1950’s house has been opened up, made more energy efficient, and the outside has been brought in as much as possible. Walls have been opened up to give a view of Central Park from the kitchen, patio doors installed to look out onto a deck and garden, windows have been lowered and bumped out to let in light and the outside. The owner will be glad to take visitors through what has been done over the years. An unusual feature (among many) is the fireplace built into a room at an angle which created a comfortable nook behind it for bookcases. There is much history in the house and reflected are the owner’s musical interests and artistic talents.