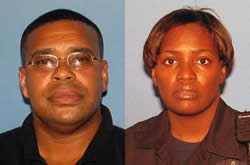 Sgt. Monica Rhodes and K9 Specialist Derrick Rhodes were honored in a Monday night ceremony in Springfield and recognized for showing exceptional courage, presence of mind, and swiftness of action above and beyond the call of duty.

This marks the second consecutive year that a Cook County Sheriff’s Department deputy has won this award, given annually for the last 25 years.

Derrick Rhodes has served in the Corrections Department for the past 21 years, while Monica Rhodes is a 10-year veteran of Court Services.  The Rhodeses, married for 18 months, are the first couple to receive the award.

They were recognized for their bravery in an Oct. 18 incident in the Roseland neighborhood where they live and not long after the well-documented beating near Fenger High School. The couple went out for breakfast and were off-duty that Sunday morning, driving west on 115th Street when they came upon a mob of roughly 20 people forming on the side of the street. They pulled over and called 911 to inform Chicago police of the impending brawl. As quickly as they had pulled over, though, the violence escalated with bricks and bottles being thrown at a young girl trapped by the mob.

The couple left their car, drew their weapons, announced their presence and ordered everyone to the ground, detaining the aggressors until Chicago police could arrive.

It marked the first time in her career that Sgt. Rhodes has had to use her weapon. “Together we got everyone down,” Specialist Rhodes said. “My wife had never done this before, but she did not miss a beat. We’re very proud of where we work and of our respective jobs within the Sheriff’s Department, and we want that to be shared with the community… The good we do shouldn’t end when we leave work for the day.”

The girl in the center of the melee was hit  in the eye with a bottle, eventually losing her eye.  The Rhodeses were able to identify the man who threw that bottle, and the perpetrator was subsequently arrested and charged.

“I think anyone would have done what we did,” Specialist Rhodes added. “It’s basic humanity.” The couple received their award during the ISA’s annual winter conference.

“Employees like Derrick and Monica Rhodes exemplify the quality men and women of our department and the fine work they do every single day,” Dart said. “I’m incredibly proud of their actions, and glad that the Illinois Sheriff’s Association is recognizing them for their honor and valor.”

The recognition follows last year’s award to Deputy Michael Stoner, who was off-duty and working on an Englewood house he owns when a naked boy came running down an alley toward him, yelling for help. Deputy Stoner assisted the boy, who was the victim of a sexual assault, and was also able to find the suspect crawling out of a nearby abandoned building, where the boy said the assault had taken place. Stoner detained that 37-year-old man until Chicago police arrived. That recently-paroled man had prior convictions for murder and was subsequently charged for the attack.