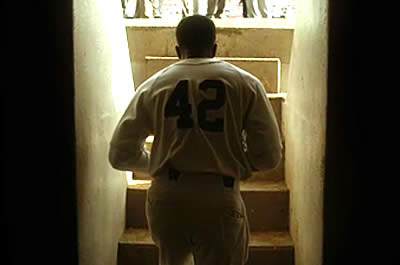 When I learned that the famed 1925 Scopes “Monkey Trial” was not (as we are given the impression in the play based on that trial, Inherit the Wind) based on the struggles of one man against the System, I must admit that I was a bit upset. Turns out, Scopes couldn’t remember if he had taught evolution in a state-funded school, or not, but since the American Civil Liberties Un ion was looking for a test case, and since the folks of the small Tennessee town where Scopes lived wanted publicity, he volunteered.

Near the beginning of 42, Brooklyn Dodgers general manager Branch Rickey (a wonderful, nearly unrecognizable Harrison Ford) announces to his staff that he is going to mine the talent-rich Negro baseball leagues for talent for his minor league team, the Montreal Royals. No, there isn’t a law against blacks playing for professional baseball teams, but there is a code. Rickey feels that this move could be the trickle that would lead to a flood of great athletes not only into the minors, but also into the majors, including his own Brooklyn Dodgers. He and his staff begin to plumb stacks of folders for the best choice.

So you understand what my dilemma was here. Jackie Robinson, that heroic figure who smashed through the decades-old color barrier…was a test case? I’m not a sports fan, (my family are all White Sox fans) but even I understood the significance of Jackie Robinson! Just before my heart could sink any further, however, the movie was saved by something it has of in abundance: passion.

This must have been a labor of love for Ford. Never having even heard of Rickey before this movie, I can’t say that he has the GM “nailed,” but he must have. Ford has mutated into a fine character actor (didn’t see Cowboys and Aliens, so maybe the rest of the world knew this before I did), retaining the drive and heroism of any of the other characters he’s played, not allowing an aging body or observed mannerisms to obscure any of heart-felt love of a good role. Seriously, as I watched trailers for 42 on TV, I think I had a slight twinge that that might be Harrison Ford, but I rapidly dismissed the thought. The older I get, the more difficult I find to identify actors in roles without help. This must have been a part he campaigned for, or the casting director on this movie was absolutely brilliant.

It’s not Ford’s picture. As a matter of fact, it’s not entirely Chadwick Boseman’s either, and he’s perfect as Robinson. As an actor, he must have been honed in on the objective and obstacle inside of Robinson: Robinson believed passionately that every person had a right to pursue his own bliss, but his temper (he was court-martialed for “insubordination” over, literally, not moving to the back of the bus) made him fair game for being baited. Boseman is low key, but the simmering does not seem to be very far beneath the surface. The struggle is very evident during the many scenes in which Robinson is pushed- by his own teammates, players of other teams, the fans.

The wedge forced through the closed door of racism is what’s at the heart of the movie, and Ford and Boseman are great collaborators in telling the story. We know we’re off to a good start when the initial meeting between the men is so dynamic, a gradual coming to minds between the two characters, one filled with altruism (and good business sense) and the other with anger growing out of his experiences. They are both united in their sense for what is just, and this scene transcends any kind of cliché. Early on, I’m sure, everyone involved in the production of 42 decided that this was not going to be a film compressing Jackie Robinson’s life into two hours, but rather a narrow look at the incidents that led to the ballplayer being such a trailblazer.

As I’ve noted before, I’m not a huge fan of sports (or most sports movies; I did not like The Blind Side. Sue me. Loved Moneyball, but that really wasn’t about sports, was it? Is any sports movie really about sports?), so there might not be a lot of people who understand the problem I have with this movie. I agree that Robinson contributed to sports, indeed, to life in a huge way. Why can’t we just have a story that shows that, rather than having anytime the guy even blinks be presaged by a fully-loaded, swollen orchestra? With history and this performance, wouldn’t that be convincing enough? And why does Jackie have a wife (Rachel, well-played by Nicole Beharie) who’s nothing but supportive? Wouldn’t marital friction have helped to define Robinson’s character?

One good old-fashioned idea that I must have seen done during numerous viewings of Family Classics is given life in 43: the vignette. One involves a kid at his first ball game, expressing wonder at it all, hearing his father yell racial epithets at the Dodgers, hesitating a moment, and then joining in. Also telling but more optimistic is a scene of kids running after the train that Robinson is riding on his way to the minors. Don’t forget about the one boy who outraces his comrades.

Hell, I thought Bend it Like Beckham was a great sports movie, so what do I know? I didn’t always feel this way about sports movies. I took my mom to see Rocky the year it came out, and when I breathlessly asked her what she thought, she told me she liked it, but not as much as I did, and could tell I was disappointed. Cynicism? Maybe. Or maybe just wondering why we need all the hints regarding our emotional response. I did tear and/or choke up at several points during the movie, but do you know what had me weeping openly. The mere mention at the end of the movie that every year, for one day, all MLB teams have each of their players wear #42 jerseys to commemorate the great strides initiated by Jackie Robinson.

BTW: I enjoyed the production design and also the casting of this movie from top to bottom. I was especially tickled to see Christopher Meloni as the belligerent yet charismatic Dodgers manager, Leo Durocher. It was (in a good way) like watching Det. Elliot Stabler, but with a Brooklyn accent. You know, like the first season of SVU.