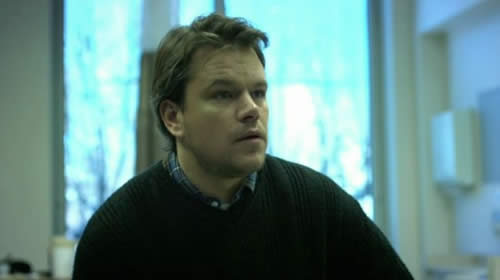 It is obvious, by now, that Gwyneth Paltrow’s character dies in the first twenty minutes or so of CONTAGION, the new film by Stephen Soderbergh. To ensure us that we’ve not been handed a spoiler, the movie opens with a very tight close-up of the actress, and she already looks like hell. We also notice that, as some text at the bottom of the screen tells us, this is “Day 2.” We’re puzzled by this odd entry into the story, but eventually forget about it. We are gratified, however, when at the very end of the movie we’re at Day 1, and everything in the movie comes together in the most satisfying fashion.

In a recent interview with the cast in Entertainment Weekly, it was revealed that CONTAGION should be looked at as a 1970s Irwin Allen disaster movie, where big stars played a great many of the roles, and the treat was in seeing who was going to get knocked off first (looking at is this way, Paltrow’s death in the trailers becomes a tease, leading us wonder that if she’s vulnerable, what about Laurence Fishburne? Or, God help us, the stunning Marion Cotillard? Is anyone safe?)

So, I went in expecting the type of disaster movie I saw as a kid during the 1970s. The name of Soderbergh is certainly a name of quality, but if this was a Soderbergh disaster movie, what would that even look like? I discarded the ideas of it resembling EARTHQUAKE (where Ava Gardner was Lorne Greene’s daughter, remember?) or CITY ON FIRE (thank God Henry Fonda ended his lifelong career with ON GOLDEN POND!). I even tried to imagine what I thought the best disaster movie was, in my opinion, and settled on THE TOWERING INFERNO, even though that movie had problems, a glaring one being what architect in his right mind would put a million gallons of water atop a 136-story building.

I wouldn’t call this a disaster movie at all, not in the “classic” sense, For one thing, the characters, seeing that they grow organically out of the actors playing their roles, are well-cast; it wasn’t as if Eddie Albert or Mickey Rooney were used just because they were free. The dialogue is also quite naturalistic. Most of all, the thing that distinguishes this movie from those of the past is the fact that those movies boasted of their huge budgets, while CONTAGION seems to be rather low-budget, but only in terms of the amount of money the filmmakers had.

And this small amount of money, as director Robert Rodriguez says, forces you to solve problems in imaginative ways. Locations seem to be used throughout the movie, rather than sets (with, Chicago, Wilmette, Glenview, Naperville Elgin, Waukegan, Western Springs and Midway Airport representing the Midwest). The crowd scenes have an authentic, chaotic feeling, even though they are tightly framed. One also gets the sense that these major stars are in this movie not to nostalgically recreate a disaster movie, but because they have a respect for Soderbergh and want to be in his movie because he’s directing. Egos are checked at the door.

You can’t even call this a stripped-down disaster movie, because spectacle is not what’s important here. The movie is closer to THE ANDROMEDA STRAIN, but it’s really reminiscent of BABEL, even though we do understand the connections. The movie’s plot is made up of several strands coming together.

Beth Emhoff (Gwyneth Paltrow), an executive, travels to Hong Kong, and upon returning home, starts feeling ill. When she has seizures and collapses, her husband Mitch (Matt Damon) rushes her to the hospital, where she quickly dies. (The scene where he’s informed of her death is icily real, and even though the audience laughed, it was that type of nervous laughter that comforts you in the face of fear. You’ll see what I mean.) Damon’s character is the closest to being an old-fashioned heroic lead, dealing with the consequences of having been married to Patient Zero. The virus passed on by her (and others, as it turns out) continues to spread (a hidden danger of air travel?) and worldwide deaths careen toward the 1918 flu epidemic statistics.

Laurence Fishburne is still a doctor, but he has become considerably less brooding and ornery since leaving CSI. Kate Winslet is a colleague at the Center for Disease Control, and they work against time to find a vaccine, and we are treated to the processes and protocol (read: red tape) of developing a new vaccine. Jude Law, following Colin Farrell’s lead and making himself as unattractive as possible, plays a blogger ranting against the government’s handling of the crisis, and announces that he may have a natural cure…and may or may not have ulterior motives. (Elliot Gould, as a researcher, has a definition for a blogger, which is worth the price of admission.)

Marion Cotillard is also on board as a research doctor who becomes involved with her assistant’s problems. Her storyline, like Fishburne’s, deals most notably with the role and intrusive power of politics in the crisis. What I really liked about the film is that even though politics does play a part in this movie, it is not the dominant thread, but rather another piece of the entire mosaic of stories. It is traditional (read: clichéd) in disaster movies to make the blame for the event the driving force of the movie, whether it’s the government, or global warming or radiation creating mutant ants that rip open boxcars and eat all the sugar.

Personally, I can’t cite any of the storylines as being weak. They are all resolved, at least partially, and if I were asked, I would say that the Fishburne storyline would be my favorite, mostly because this big-hearted and very human man puts himself in a moral quandary, and is forced to deal with it like the man he is. There aren’t a lot of emotional fireworks or heightened moments in CONTAGION. The movie does feel like we’re watching the news.

See if you notice too, at the beginning of the movie, the shots of people doing things with their hands. When I realized that this had been working on me subliminally but now had me in its full, sweaty grip, I began long, enthralling freak-out that this movie is.

BTW: Everything you’ve heard about THE HELP? It’s true. It is a must-see.