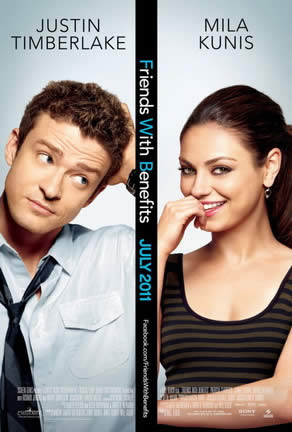 Leonard Maltin, in his indispensable Movie Guide, described THE BREAK-UP as “what passes for romantic comedy these days,” and romantic comedy has never really been my thing (although I avoid using the term “chick flick”). I dreaded going to see FRIENDS WITH BENEFITS on purpose, and even found my feet involuntarily trying to turn my body away from the entrance of the theater. If Maltin is right (and I tend to think he is) this movie doesn’t assure us that there is any kind of renaissance on the horizon.

I didn’t see NO STRINGS ATTACHED (whose working title was, by the way, FRIENDS WITH BENEFITS) a movie with a similar premise released in January of this year. We’re not talking about two Truman Capote movies coming out within a short period of time, so I’m not sure exploring the comparison would be worth it. FWB seemed long; I found myself getting into comfortable positions much in the same way I do when I’m trying to fall asleep. Most of the movie seemed tired to me, too, with only a few genuinely human moments thrown in there, most of them provided by Mila Kunis.

Justin Timberlake plays a hotshot Web page editor who’s asked to come to New York to interview for an editor’s position at GQ. Kunis is the headhunter that has secured him for the interview. He is met at the airport, as the movie admits, in a scene out of WILL AND GRACE: standing on the baggage carousel trying to retrieve a sign she made with his name inscribed in lipstick, all the time handing out pieces of luggage because she’s well, there. I believe they used to call this the “meet cute.” She drives him to the magazine and waits for him to return from the interview because, well, she gets a commission if he accepts.Tthey have dinner together, very quickly become friends, and just as quickly decide to have sex on an ongoing basis because, you know, if it’s just sex, there’s no chance of complications.

Didn’t these two see NO STRINGS ATTACHED? It’s been out for about six months! But seriously, you know what really bothers me? This movie is about a magazine editor. Why do movies have to so frequently have editors of fashionable periodicals or other upper-class types of jobs as protagonists? Did you notice that late in the last century every male protagonist was an architect? I know these are necessary professions (hey, I’m a member of the Chicago Architecture Foundation and I do write for a periodical), but can’t screenwriters learn to create characters that are compelling for their own virtues, and not just the fancy wrapping they come in.? And do people become headhunters at 27? Did Kunis’ character go to the same I’m-too-young-to-have-this-job-but-for-the-plot-to-work-I-must school as Anna Kendrick did? (Hey, I loved UP IN THE AIR. Who knows? Maybe I’m the one out of touch with reality.)

Are flash mobs that spontaneous and well-conceived and that easy to put together in a short period of time? Is it absolutely necessary for a romantic comedy to have a gay friend? Well, when he’s played by Woody Harrelson without a whiff of sibilance or lisping, the answer is a qualified yes. His character, a GQ sports editor is sometimes tiresome, but he does provide some of this comedy’s best comic relief (yes, I said that.) He does seem to be having fun, and he did save 2012 from utter disaster, didn’t he?

Maybe these are quibbles, but I needed something to think about to amuse myself while watching the movie. So they have loveless sex. The bad thing is, we get to watch it. There are several sex scenes, striving for humor, but coming across as clunky and staged. It occurred to me, during the movie, why loveless sex scenes don’t work, at least not for me. In a good sex scene (I’m sorry, Sister, should I be saying “love scene?”) the prurience is, without doubt, a big contribution to one’s enjoyment, but the real excitement lies in the passion and the willingness of the participants to be that vulnerable and, well, naked for each other. It creates the suspense, the reason to care for the characters and maybe hope the relationship will survive. I guess loveless sex scenes would work better if they were better scripted. And edited. And acted.

I don’t suppose it’s spoiling anything to reveal that one or both of the characters start to have feeling for each other. When that realization warms up Kunis’ eyes during one of thetimes they’re in bed, it’s so heartfelt and warm that you begin to think the movie is going to get on the right track. But no. We have a silly episode in Los Angeles involving the Hollywood sign, and a serious turn involving the disease of one of the supporting characters. Here the movie took the same kind of departure as LOVE AND OTHER DRUGS did, and even though that movie was far from perfect, the way the lead characters dealt with the emotions there seemed more genuine to me.

Kunis does present a fully-developed (though incessantly chirpy) character here, and even though I wasn’t one of the folks saying that she was robbed of an Oscar nomination for BLACK SWAN, she is talented and believable. With this movie I forgive Timberlake for BAD TEACHER; he’s a good actor, but I think it’s the kind of character he seems to play that irritates me, or maybe it’s his voice, or his mannerisms…I don’t know. He was meant to be unlikable in THE SOCIAL NETWORK, so I found him quite impressive in that movie.

Jenna Elfman is genuinely warm and moving as Timberlake’s sister, and Richard Jenkins especially deserves those adjectives as his father, who is dealing with Alzheimer’s. Unfortunately, Jenkins is saddled with The Speech that Makes the Protagonist Stop and Think, and as written, it seems more inserted into the proceedings than organically rising out of the story. Patricia Clarkson yet again trots out her ex-hippie mother that is too cool for words, only a wardrobe change different from EASY A, which, ironically, starred Emma Stone as her daughter, who appears briefly (and unattractively) here. Some cool editing in Stone’s scene, though.

I saw MIDNIGHT IN PARIS last week, and although it took a while to get going (Michael Sheen, so good as both David Frost and Tony Blair in other movies, plays a pedantic, insufferable know-it-all college professor, whose overbearing behavior becomes, we,, insufferable), once disaffected writer Owen Wilson is transported to 1920s Paris, the movie really shines. Woody Allen has used other actors, notably Kenneth Branaugh in CELEBRITY and John Cusack in BULLETS OVER BROADWAY to play the neurotic character he’s played in practically all his movies, but no longer could because of his age. Owen Wilson seems like an obvious choice here, but again, there’s something about Wilson that I just don’t like. Where Allen is quirky and odd, he is always someone to root for in his movies, but Wilson comes across as just a garden-variety schlub. It didn’t sink the movie for me, though. The film is filled with unusual casting choices that really work, particularly Corey Stoll as Ernest Hemingway, Kathy Bates as Gertrude Stein, and especially Adrien Brody as Salvador Dali. As Wilson’s object of affection, Marion Cotillard is radiant.

It’s decent, but it’s not in the same pantheon as ANNIE HALL. See? A romantic movie I liked.