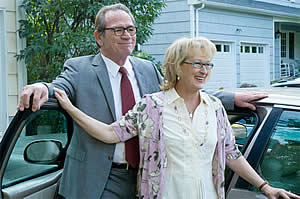 Watching Hope Springs, where Meryl Streep and Tommy Lee Jones play a married couple whose sexual life has become stunted, and seek help from a prominent (and best-selling) marriage counselor, one feels like one is watching an acting exercise in an acting class. A really, really good acting class. (Hear that guy banging at the door? That’s James Lipton, trying to get in.)

I’m not saying that as an insult, or even as a qualified statement. When I was a kid, we all went out to the Bismarck Theater to see John Huston’s The Bible. Seriously. They filmed the Book. Well, only about half of Genesis, actually. I asked my father what he thought about the movie, especially anxious to hear his report on what he thought about George C. Scott, playing Abraham. My father replied, “Well, I thought he was just rehearsing.”  Jones and Streep very well could be, but who would know? These two Titans make every cough, every downward glance, every aborted sound coming from their lips, every tic seem absolutely real. I was a theater major, so I noticed these physical and vocal manifestations as actors’ choices, but slapped myself silly each time I did it. I just had to (easily) suspend my disbelief and savor.

The casting is what you’d expect…for Tommy Lee Jones. But as Arnold, the curmudgeonly, straight-arrow and faithful husband to Streep’s wife Kay, he believably essays a man peeling away the callouses created by thirty years of marriage away, slowly revealing emotions he really hadn’t dealt with for decades. Arnold feels safe. The children are gone, business (he deals with other people’s taxes, ‘natch) is good. He feels secure in his routine. Every morning his wife fries him two eggs and a strip of bacon (which at one point are casually thrown out without being eaten- I could feel the spirit of my mother punching my shoulder). There’s a really great choice made by either actor Jones or director David Frankel. In one scene, where Jones’ character, trying to eat his breakfast while being prodded to answer a sensitive question, puts salt and pepper on his meal, then repeats the process two or three more times, as if trying to physically restore a sense of order.

What makes Arnold feel like he’s in a good, committed marriage? He’s been faithful to his wife for thirty years, and that should be enough. Kay, however, has been having ruminations of her own, and she feels that the couple needs to talk about, and deal with their sexual drought. Streep’s character learns about a satisfaction-guaranteed married-sex guru, and is willing to invest her money into the pricey journey from Omaha to Maine and for a week’s worth of sessions.

Has anybody ever talked about Meryl Streep being cast as you’d expect her to be? I haven’t seen all her movies (Death Becomes Her? Nope. She-Devil? Won’t ever. But I know she has her comic chops- I did see The Devil Wears Prada.) For me, she’s been haughty (her brief, upper-crust presence in the Jane Fonda dominated Julia), relaxed and kooky (the first half of Silkwood), incredibly uptight (Doubt), dissipated (Postcards from the Edge), and sexy (the glow she has when she’s around her doomed real-life lover, John Cazale, in The Deer Hunter, Redford washing her hair in Out of Africa, and, God help me, just about all of Sophie’s Choice…especially when she speaks Polish). I was as surprised as the next guy when she trounced Viola Davis for the Best Actress Oscar last year, but after all…it was Meryl Streep!

Kay, as played by Streep, is not a bundle of emotional quirks, but you do get a strong sense of yearning plus timidity from the vocal and physical manifestations Streep the actor uses. For the longest time, Kay has repressed any feelings of frustration (or hope), until her emotional shield starts to decay. Kay is quiet and reticent, and supportive of her husband, but  Streep (like Jones with his character) does not rely on cliché to “indicate” (a no-no word in acting class) to the audience what the character is feeling. Streep and Jones, as actors (and hopefully as friends, too), trust each other’s grip on the character, and just respond to each other, naturally.

The script, too, thankfully, avoids cliché for the most part; there is no dark, melodramatic secret behind the lack of intimacy, there is no eloquent, three-page monologue forced out of the quiet Kay, and there are no annoying side characters who have all the answers. Indeed, there aren’t too many side characters at all; Elisabeth Shue must have been passing through Connecticut during filming and decided to play a bartender for a day. If you’ve seen the trailer, you’ve seen Mimi Rogers’ performance in its entirety (she’s the neighbor with the Corgis). Damian Young has a longer bit as a very patient innkeeper. (Young, as an actor, has been all over the Law and Order universe, and has been in tons of other things.)

Steve Carell’s work really needs to be mentioned because his character could have been the “nutty,” or “free-thinking” character thrown in to balance the naturalism of Streep and Jones’ performances, but he is surprisingly low-key, controlled, even when challenged by Arnold’s brusqueness, and is only afforded a quick I-know-I’m-smarter-than-you-are-Tommy-Lee-Jones-but-I-really-want-to-help-you-so-do-as-I-say smile as a humorous affect. His character almost borders on being a plot device, being the source of questions that gets Arnold and Kay to think and to act and supply the action of the movie, but he is so danged sincere and so not into himself (despite the best-seller) that you want to root for the couple with him.

And, for a guy who doesn’t care much for sports, I was rather moved when Carell’s character (whose first name is Bernie, by the way; doesn’t totally take out the sting of that character Jack played a while back, but hey) uses a great football metaphor; applied to the circumstances and given the warm, encouraging tone that he says it in, it made me tear up a little. I will spend the rest of my days applying it to every situation I can, sexual or not. (It’s more about the willingness to try, rather than…well, you know.)

The most enjoyable thing about the movie is watching how Kay and Arnold strive to return to each other on a very specific level. The reaching for a common ground that contrasts Kay’s worm-turning and Arnold’s sometimes almost violent reactions that mellow as he realizes that he’s forgotten about the ultimate expression of feeling that sex is sucks you right in. And speaking of two actors trusting each other, the scenes where the two sixty-something actors have their characters start experimenting again with intimate physical contact…well, all I can say is that there’s hope for the rest of us.

BTW: I, like Dad, thought George C. Scott was a great actor.