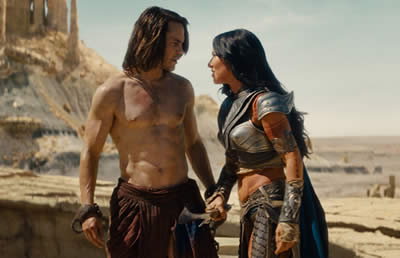 John Carter is a decent, literate, beautifully designed and technically incredible version of the Edgar Rice Burroughs novel A Princess of Mars (1917), which first featured the eponymous character. It took nearly seventy years before the book finally made it to the big screen. (A crappy direct-to-DVD version, called Princess of Mars and starring Antonio Sabato, Jr. and Traci Lords, had been released in 2009. The copy on the poster for that movie says that it inspired James Cameron’s Avatar, and indeed, when the movie was shown on cable it was shown as Avatar as Mars.) Bob Clampett, creator of Woody Woodpecker, was working on an animated version that could have come out before Snow White and the Seven Dwarves; in the 2000s several attempts were made to film it, including some heavy hitters as Robert Rodriguez and John Favreau as directors, but it didn’t happen.

So here it is. And you know what? It’s way too late to be accepted as anything more than a well-made science-fiction blockbuster (that didn’t wait for the Memorial Day weekend, which usually opens the summer movie season and makes a lot of money, but maybe it’s just me). It’s gorgeous to look at, mostly well-acted, and holds the attention, but it’s not the kind of movie that makes you want to leave the theater and do heroic acts, like a movie we used to call Star Wars did.

An extended sequence set in 1868 America begins the movie (after a somewhat puzzling Mars-set teaser). John Carter, a bitter ex-Confederate (is there any other kind?) soldier regales fellow saloon-goers with tales of a cave he has found with a vein of gold. Leaving the tavern one day with the sound of belittling laughter barely behind him, Carter heads for the cave, a natural room with spider-like legs carved into its walls, but is stopped by Lieutenant Powell, a Union commander, who tells Carter that because of his great abilities as a soldier, he must accompany the lieutenant’s regiment and fight the Apaches. Carter refuses and is imprisoned, escaping each time, with the escapes forming a rather humorous montage. Ultimately, Carter and Powell band together when they both have to fight a common enemy.

Backed into the cave, Carter sees a strange humanoid creature there. Before he can say anything, he is enveloped by a light and deposited with a thump on a barren landscape. (We’re actually in Utah now, filming location junkies. The same place where they filmed the original Planet of the Apes and my favorite John Wayne movie, The Greatest Story Ever Told.) After accepting that something crazy did indeed happen, Carter quickly realizes that he can travel in great leaps (a gravity thing, ‘natch), but is soon captured by the Tharks, a computer-generated alien race that some folks think look like a multitude of Jar Jar Binkses, but that never occurred to me.

These aliens do not speak English (like everyone in the universe does on Star Trek and Stargate) and they have sport with Carter. (Eventually one of them will give him a drink which is evidently a liquid form of the Universal Translator, and he and we begin hearing everybody speaking in English.) At a critical moment, another race, the humanoid Red Martians, start to attack the barbaric Tharks, and when Carter sees among its warriors the comely Dejah Thoris (looking great whacking away in a Frank Frazetta-inspired skimpy-yet-somehow-effective suit of armor), he switches sides.

Once Carter gets to Mars (Barsoom, to the Martians) Taylor Kitsch’s performance becomes more credible; when he is in tight situations, we get a genuine feeling of shock or despair while he’s struggling to get out of the situation. He also exudes a good sense of compassion to the downtrodden. When he is on Earth, however, he adopts that dark, husky growl that some action stars like Clint Eastwood (and Timothy Olyphant, if you saw Rango) can do naturally, but sounds forced here. Lynn Collins’ Princess Dejah Thoris had me from the git-go, however, with her finely-modulated voice, steely stare, and a consistently bare midriff. (Sorry. I’m only human.)

Anyhoo, the princess is Princess of Helium (how I would have paid real money to have heard them talk with helium-influenced voices), and Helium is at war with rival Zodanga. Dejah’s chief military advisor, all awash in Roman centurion garb, informs her that the only way to attain peace (and not be wiped out by the Zodangans) is for her to marry the prince of the other side. Into this conflict (among others) is thrust John Carter, and various alliances, double-crosses and battles ensue.

Oh, and that guy in the cave. Turns out there are Time Lords (or whatever they’re called in Burroughs’ universe) zipping around space, messing around with the Space-Time Continuum. One of them even guesses that Carter is a Civil War-era Virginian.

You could easily say that a lot of this sounds familiar and hokey, and would sound plain stupid with lesser actors (the cast boasts Willem Defoe, Thomas Hayden Church, Bryan Cranston and Brits Samantha Morton, Cirian Hinds and Dominic West, all doing a fine job) and cheaper production design. It’s important to realize, however, that the source material is nearly a hundred years old, and actually had a tremendous influence on modern science fiction, providing inspiration for great writers of the genre like Ray Bradbury, Arthur C. Clarke, and Robert Heinlein. The movie is fairly faithful to the book, which explains the tone’s seriousness and the plot’s meatiness. So, clichés there may be, but not from Burroughs’ standpoint.

Filming in Utah and New Mexico, as well as in England, really helps with the atmosphere, and I must say that the computer-generated images are fantastic. I am not jaded with CGI; I know there are folks out there who find fault with it whenever it appears, but I’m not one of them. We see whole villages of Tharks, a stadium full of them, and creatures best described as gigantic, fierce, two-headed polar bears, among other creations. There are great battles above and below the ground. I’m sure that Burroughs would have been excited to see this.

Speaking of Burroughs, he actually does appear as a character in the movie, as John Carter’s young nephew, who after his uncle’s apparent death (at the beginning of the movie) receives a journal addressed to him, detailing Carter’s adventures. It seems like a typical movie device, but not only did it work, in my opinion, but the same device was used in the original novel.

I’m not going to be a super-ardent defender of John Carter against the critics (and there are many), but for me it was pleasurable, if not always gripping. It’s probably the best rendition of the story that we’re going to get, thanks to a huge budget, earnest actors, and great special effects.