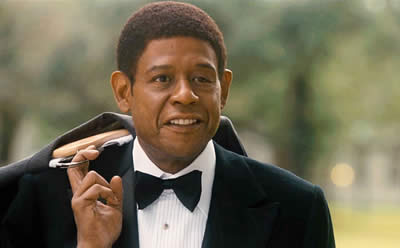 Several movie critics have been calling Lee Daniels’ The Butler an African-American Forrest Gump. One could make a point for Backstairs at the White House Meets Forrest Gump as well. As always, this is a superficial, handy way of putting a movie in a box so It can be stored for future dry comments.

We’ll talk about that title later.

Eugene Allen was an African-American who distinguished himself through a career of service in the White House, ultimately becoming chief butler. He is the inspiration for the character and story of Cecil Gaines, wonderfully embodied by Forest Whittaker. It’s important to know, going in, that this is not a biography. (I thought it was.) That’s quite a relief, because if it were, Cecil would be indirectly responsible for bringing about legislation involving civil rights, and Cecil’s son, Louis, would have been witness to just about all of the key events in the movement.

Hence the Forrest Gump reference. But, unlike Forrest Gump, these two characters, particularly the son, Louis, are involved. After witnessing the shooting death of his father after he confronts the owner of the plantation where the family works, Cecil does the best he can to console his mother (Mariah Carey- a universe away from Precious) after the owner rapes her. Cecil is taken in by the plantation’s matriarch (Vanessa Redgrave), who relieves him of his duties in the cotton fields and teaches him how to be, in  the unfortunate words of the time and place, a “house nigger.”

Eventually Cecil leaves the plantation and falls under the auspices of Maynard (Clarence Williams III- always a treat to see him), who helps him to polish (in more ways than one) his skills as a butler, takes a job at an exclusive Washington, D. C. hotel, and impresses enough people to make it to the White House staff. During his orientation at the White House, Cecil is asked by the maitre d’ if he is a political man, and upon saying no, the maitre d’ says, “Good. Politics will not be tolerated at the White House.”

Cecil has since married Gloria (Oprah Winfrey), a maid he met while working at the fancy hotel, and together the couple has sons Louis (David Oyelowo), and Charlie (Isaac White). The boys grow up under the distant shadow of Emmett Till, and when Louis is old enough, he decides to go to the historically black Fisk University in Nashville, which angers Cecil, who believes the South is still a dangerous place for a black man.

Why we don’t have a Louis Gaines Day in school is beyond me; the man is present at all the watershed moments of the Civil Rights Movement. He has famed (real-life) activist James Lawson (a mesmerizing, powerful Jesse Williams) for a teacher, who engages his class in the ways of the passive resistance of Ghandi, but also in the “self-defense” ways of Malcom X. He is in the “sit-in” at the whites-only lunch counter at the Woolworths in Nashville, where he resists verbally and then physically escalating taunts (and, of course, is arrested with his compatriots). He is on the Freedom Riders bus savagely attacked by the Ku Klux Klan. He’s in a Memphis hotel room where he shoots the breeze with Martin Luher King, Jr. (in a very interesting conversation about the nobility of “black domestics”) before King decides to go out for a breath of air- and meets his death by rifle fire. Louis is also one of the founding members of the Black Panther Party- who, if you didn’t know, did not always rely on passive resistance.

Cecil, just by his presence, by his warmth, sometimes can elicit the best in people, and it is his stoic endurance of what his son is going through that persuades Kennedy to propose the Civil Rights Act, which is signed into law by an equally impressed Lyndon Johnson. Perhaps we should have a day honoring the passive yet meritorious service of Cecil Gaines?

(Obama enters the picture, too, in a most touching way.) Director Daniels keeps us engaged for 132 minutes, and the only flaw (it’s a minor one) was also his strength in his previous movie, Precious. In that movie, Daniels created a number of highly believable scenes with a fly-on-the-wall naturalism that fit a cold, stagnant environment. He does the same here, especially for family scenes. And although these scenes are entertaining, (Terrence Howard, as a neighbor, is a riot), they seem a little out of place sometimes in a movie presenting such a sweep of history.

This movie is the Harry Potter of African-American themed movies, with its great roster of black stars- all actors here, thank you cast and Mr. Daniels. Everyone shines. I did not realize that that was Cuba Gooding, Jr. as one of Gaines’ fellow butlers. I am so glad that Gooding has washed off any of the stench that he contracted from Boat Trip and has made his return as a respectable actor. And Lenny Kravitz! I was not all that impressed with his performance in The Hunger Games- he seemed like a musician playing an actor playing a character. Here, however, he is natural and nuanced as another of Gaines’ colleagues.

And how is it that the brazen Oprah Winfrey can shed what one commentator called her “Zen superiority” and render a character as humble and as unaffected as Gloria, Cecil’s wife? It just isn’t fair. She spans the decades as well as her screen husband does.

Some of you may remember 1966’s The Greatest Story Ever Told, a very somber telling of the story of Jesus, wherein a “cast of stars” played just about every part, no matter how tiny: Shelley Winters as the woman who touches he garment of Christ, John Wayne (notoriously) as the centurion at the Crucifixion, and Sidney Poitier (who is the subject of a key and heated argument in Butler) as a silent Simon of Cyrene, who helps Jesus to carry the cross. Whether it’s well done or not, I am a big fan of this sort of movie, and the gallery of star Presidents did not disappoint- in plan, if not always in execution.

James Marsden (Prince Charming in Charmed, remember?) probably comes across the best as John Kennedy, incredibly moved by what happens to Cecil’s son and wants to almost personally atone for it. Minka Kelly as Jackie doesn’t have a lot to do (actually, Caroline has more), but she does utter a powerful, moving silent scream. When Ronald Reagan entered the scene, I had to close my eyes to place that voice, but then it hit me as belonging to Alan Rickman. I remember him as the emasculated angel in Dogma, but you youngsters out there will remember him as Severus Snape in the Harry Potter films. He looks like Reagan, but that dark, sepulchral voice gives him a sinister quality I don’t think the President actually had. When this Ronnie Reagan says, “no,” it sounds like he has the finality of the Prince of Darkness (actually, I really liked it). Reagan helps Cecil to achieve a goal, but he also uses him.

(Jane Fonda plays Nancy Reagan! She has only one scene, but Hanoi Jane nails it. Youngsters, ask Mom and Dad to point out the irony.)

Liev Schreiber as Lyndon Johnson is somewhat borderline, but the rest of the Presidential casting is just bizarro. Schreiber plays LBJ as an apoplectic, constipated (trust me) ranting redneck that is fun to watch but probably not totally consistent with the historical record. Robin Williams’ Eisenhower is just odd casting (and I know Williams can do great, detailed serious work), but he isn’t on long enough to convince me that he’s Ike. The Internet Movie Database informs us that Melissa Leo’s scenes as Mamie Eisenhower were cut, so maybe we’re all missing something. But as it stands, Robin Williams as Eisenhower has all the credibility for me that Bill Murray had as FDR.

John Cusack as Nixon, though…what were they thinking? Cusack is a fine actor, and he Method acts the best he can to get the creepiness and humorlessness across, and if you close your eyes, it would probably work- the timbre, the pacing, it’s all there- but he doesn’t have the look or dark presence that Nixon had.

The two things that make Butler irresistible watching, then, are the father/son relationship and even more, I think, the gripping reenactment throughout the movie of the Civil Rights Movement. Bestof all is the Woolworths lunch counter sequence. Humanity’s inhumanity to humanity is vividly captured by filming the scene as a montage contrasting the indecency and violence occurring at that Nashville drugstore against the absolute rigidity and properness of preparations of a state dinner at the White House, with the unknowing Cecil standing erect, waiting to serve. Quite the history lesson.

BTW: If you’re interested in “what ifs” as much as I am, take a grain of salt and have a look at the trivia section for this movie in The Internet Movie Database. Matthew McConaughey as Kennedy? Liam Neeson as Johnson? Boggles the mind. And oh, yeah. I seem to have a problem trusting the better angels of our nature, and thought that Lee Daniels put his name with the title because he was a raving egomaniac. According to the IMDb, Warner Bros. filed a claim against the Weinstein studio, saying that they already had a movie by that name (a short from 1916 called The Butler); the problem was solved by putting the director’s name before the title. Sorry, Mr. Daniels.

Bernie Jablonski was an exceptional teacher of Mass Media and Film Study in the Fine Arts Department at Marian Catholic High School.