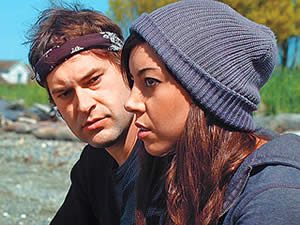 Mark Duplass and Aubrey Plaza in Safety Not Guaranteed. (SUPPLIED)

Usually I bemoan the fact that small and/or independent movies (that I usually read about in my beloved Entertainment Weekly) don’t seem to play in Chicago’s Far South Suburbs, and that one has to go to Evanston, Streeterville, Lake View or some other Northerly province to see them. Here’s one for you, then. A movie that cost less than a million dollars to make only playing at a South Suburban theater! And in walking distance! (I didn’t, but….I could have.) I wasn’t even sure of what I’d see for this review; I felt that you probably didn’t need words from me to see or not see The Amazing Spider Man or The Dark Knight Rises, so I went to what we used to call “the movie section” in “the papers”…and trawled.

I lit upon Safety Not Guaranteed, of fairly recent vintage, and not having had received a lot of play, so I figured I could write a blessing or a warning. I’m very heavily leaning toward blessing. The coup, of course, is that I could claim to be the one that gave you that blessing!

To you, it’ll sound either iffy or intriguing. At Seattle Magazine, Darius (Aubrey Plaza, of TV’s Parks and Recreation– and a doe-eyed beauty) is a new intern. We can tell she’s an intern because she buys one of those value packs of toilet paper at a local store with her own money and schlepps it into the office. She is eagerly awaiting an assignment with a roomful of other eager interns, listens patiently while the editor-in-chief (Mary Lynn Rajskub, Jack’s colleague Chloe on 24), scolds them and veteran reporters alike for not having any fresh story ideas. One of the vets then mentions a personal ad he recently saw, where someone is searching for someone who will accompany him on a time-travel journey, leaving the choice of weapons up to the respondent, and a promise of payment upon their return to the present.

Time-travel movies have always been a turn-on for me, with the novel and original film version of The Time Machine and the “City on the Edge of Forever” episode of the original Star Trek both leaning heavily on my mind. Of course, there’s crap, like the cheesy film adaptation of Ray Bradbury’s A Sound of Thunder, or there are movies and episodes that are just too dangerous and dependent on going into the past and “setting things right” when a time traveler messes up the past. The episode of Star Trek: The Next Generation where the crew dies (horribly) over and over again until the guy who plays Frasier fixes things, or the one where the Enterprise passes through a cloud and suddenly the Federation is at war with the Klingons, and Tasha is back from the dead…of course, remove the altering-time story, and the episode is entirely about Whorf reveling in his new-found love of prune juice.

Let’s also not forget the closest thing to this movie, if only in its shared very-very-very-low-budgetedness, Primer. In that one, two office workers build a time machine out of a Xerox machine, essentially, and make it work, but shenanigans ensue when their past, current and future selves all start occupying the same timeline. I saw that movie twice. In one night. And oh, how my head did hurt. But if all of this is making some of you salivate and some of you run screaming from the room, relax. Safety Not Guaranteed is not really about time travel!

So. Jeff (Jake M. Johnson, one of several male leads on TV’s New Girl) says he would be willing to journey to Ocean View WA for a human-interest type of interview, taking with him, in a character-setting moment of insensitivity, “the lesbian and the Indian.” Well, of course she’s a lesbian! She has short hair! The other intern, Arnau (Karan Soni) has a slight sibilant lisp, which somehow escapes Jeff’s attention. They all jump or lumber into the car, and head off for the long drive to Ocean View, get to their seedy motel, negotiate the bed situation, and the next day the trio is off to find the mysterious correspondent.

The trio plants a phony response to the ad in the P. O. box mentioned in the personal ad, and after the once-excited interns spend hours staking out the post office, a man goes directly to the box, takes out the letter, and leaves. (Go to http://www.imdb.com/title/tt1862079/trivia to discover the in-jokes concerning this scene.) After tracking the man down to a rather remote house in the woods, Jeff, having let the interns do all the hard work, the set-up, goes to the man’s house and approaches him in an extremely friendly manner, which immediately raises suspicion. This doesn’t work, so it becomes apparent that Darius, as the sole female, needs to be the one to approach the man.

Darius up to this point has been portrayed as a kind of neo-slacker that is doing this because she signed up for it and wants to do her job, not necessarily because she thinks this will be the move that will make her career. But once she gets uh, spruced up and tries to entice the man (who works in a grocery store), Plaza’s deadpan comic talent gets put to good use. All of a sudden this retiring woman plays a part as if it were second nature. She quickly impresses the man, whose name is Kenneth (and is played in a similar deadpan way, by Mark Duplass), with a straight-faced desire to join him on his mission- that she believes in him. Through Darius’ sincerity, or attractiveness, or both, he decides to try her out- to see if she’s fit for the mission. This scene takes place while Kenneth is working in the store, and both actors, knowing that the key to comedy is playing an absurd situation straight, make Darius and Kenneth very funny. The scene puts a humorous spin on Campbell soup, too. Trust me.

It should be no surprise to learn that Jeff has actually come to Ocean View with an ulterior motive. It should be no surprise that while Darius is deceiving Kenneth to get a story, Jeff takes on the task of “making a man” out of Arnau. (It might be refreshingly surprising that the humor in the movie comes out of Darius’ nerdiness and fear of women, played in an honest way, without resorting to mocking his ancestry.) And it probably isn’t letting any cats out of any bags to reveal that, yes, Darius begins to feel an attraction to this strange, strange man.

A day after I saw the movie, the images that were stuck in my mind were those of Darius’ growing attraction to Kenneth changing her demeanor. The scene that particularly warms me up is a scene where the two are at a campfire, midway through Darius’ “training” for the time-travel trip. Kenneth is rather self-consciously making music with a “zither” (see the “Goofs” note at IMDb), watching his hands to make sure he gets it right, and the simple smile on Plaza’s fire-lit face that seems so sincere in spite of this kook’s ideas and behavior, lets you know that Darius is already lost, that Kenneth is no longer a target of ridicule, but a potential lover.

All the aforementioned actors use their comic skill to expert effect. Rajskub is (appropriately) one-dimensionally bitchy. Kristen Bell, giving the movie some Hollywood Cred, appears in a key 10-minute scene (good scene), probably filmed in one day, and leaves the movie, no doubt, with fifty or sixty Indie Cred points for her resume. The film has the appearance of a low-budget film, and is shot in a clear-cut, non-pretentious manner. The movie was a hit at the 2012 Sundance Film Festival. I have a shirt from Sundance. I’ve never been to Sundance but my sister was nice enough to pick up a shirt for me when she was on a business trip to Park City UT.

Safety Not Guaranteed is not your usual love story, but there’s not a speck of artifice about it. It’s my idea of a feel-good movie, and I don’t trust most movies with that term attached to them. If you’re in the neighborhood, it’s at the Holiday Star (Park Forest) Theater, and to make me even more joyous, so are two other small, indie films: The Best Exotic Marigold Hotel, which I haven’t seen, but my sister has; she gets to do everything…and Moonrise Kingdom, which is my favorite movie of 2012 so far. My second favorite is The Cabin in the Woods, so I’m sure when the Oscar-bait movies come out near the end of the year, things will balance out. I loved Kingdom, with its coming-of-age story and peculiar characters, all dealing with the absurd with very straight faces. Every time I think of that movie I start cracking up, and then I think about a particular moment of sweetness from it. Go to the Holiday Star Theater! $3 a ticket! You can’t go wrong! People living in other cities, go to the matinee!

BTW: A really interesting piece of background information on Safety Not Guaranteed can be found at http://www.backwoodshome.com.