Movie Review: The Cabin In The Woods 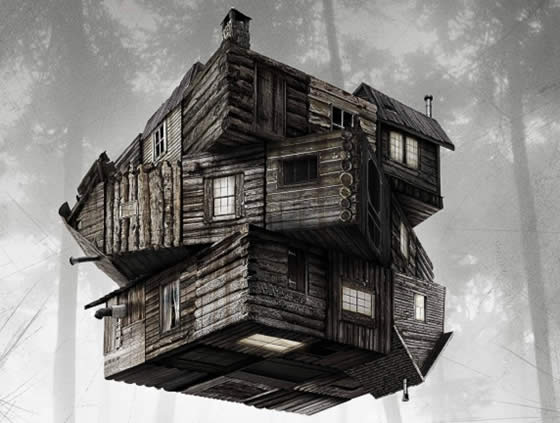 While I was explaining the premise of The Cabin in the Woods to a colleague of mine at school, he quickly dismissed the movie as “The Breakfast Club, but where the assistant principal is the monster.” He was sort of right. The movie is set in, around (and, tell you the truth, under a cabin in those lush Vancouver woods), and the folks visiting this cabin (or, as we have seen so many times in this horror subgenre, a haunted house or abandoned insane asylum-wayside-motel-or-what-have-you) are archetypes that are familiar, maybe even anticipated by us. If we were looking at these five kids in terms of Tarot cards, they would have names like The Athlete, The Scholar, The Fool, The Virgin, and The Whore.

But this movie does something wonderful with the “types.” Rather than making them people easily tagged by just one trait, the characters may not be like all of us, but they are recognizable as human being. We empathize with them. We fear for their lives. We are also free from the irony and joking self-awareness (of what the situation would be like if the characters actually were in a horror movie) that the Scream movies engendered. The influence of the first Scream was tremendous, but the gimmick became tired, so here we have five fresh-faced and attractive young people plunged into a situation as if they were really going through it unguarded.

It’s a great trip. The movie was written by Joss Whedon, whose Buffy the Vampire Slayer TV show certainly had the Mark of Quality (and is almost certainly going to be embraced by its fans) and was directed by Drew Goddard, who debuted as a director with Cloverfield. They had me on the edge of my seat and/or freaked out at any given time during the movie, and they masterfully manipulated me with Hitchcock’s polar opposites, shock and suspense, to say nothing of the gonzo violencewhich ultimately erupts in this movie. (Hard “R,” kids. Plan your movie going adventure accordingly.) I’ll tell you what I can, but you really need to see this by yourself to get the maximum impact out of it.

So. Five college kids drive out in a van to a remote cabin owned by a relative of one of them, for a weekend of fun, sex (for one couple), blind-date awkwardness (for another couple) and becoming blissfully unaware through drugs (for the odd man out, who, refreshingly, is pretty much the only one who indulges in pot smoking, making the other characters the more empathetic for those of us who don’t/haven’t.) The stoner, played by Fran Kranz, has the movie’s funniest lines, and is, strangely enough, the one member who begins to suspect that Things Are Not As They Seem. (It is nice, too, that the lines that sound like a screenwriter wrote them are reserved for Kranz, avoiding the Gilmore Girls trap of everybody in the movie sounding like they write for the New Yorker.)

The jock, played by a pre-Thor Chris Hemsworth (Cabin was completed in 2009, but sat on the shelf while its studio, MGM went through bankruptcy proceedings until Lionsgate picked the film up), and the party girl (“slut” would be too harsh; she’s played by sexy New Zealander Anna Hutchison) do what you would expect them to do in a movie/situation such as this, but unlike movies from the past where these “types” would be relegated to the back as monster fodder and so underdeveloped as characters as to not deserve our concern, we do come to care about these two, and don’t find them offensive or obnoxious. (Also winning my heart is the response of Jules, the girl, to a dare while playing Truth or Dare. A scene to become legendary, I’m sure. Surprisingly…stimulating.)

As is often the case in recent archetypal horror movies, the shy virgin (or near-virgin), is so attractive that we wonder why she’s so lonely; it certainly crosses our mind when we meet Dana (Kristen Connolly), in her underwear, being persuaded by Jules to ditch her books and classwork while on the trip.  Jules has set her up with Holden, who is definitely not the Caulfield type, and is played by Jesse Williams, as a shy-yet-beautiful intellectual whose knowledge of Latin sure does come in handy.

We continue to bond with them through scenes of the group having fun with each other, minus the nastiness sometimes associated with the genre. Ultimately they discover that things at the cabin are intriguing but a bit off, an unexpectedly open door beckons them, and you think you know the rest (as the Cabin in the Woods poster tagline reminds us), but…

I will tell you that there is an increasingly larger group of white-coated men and women that seem to be somewhere near the cabin, but rather than springing this fact as a “revelation” deep into the movie, their story develops as a parallel action with that of the kids. Chief among them are those great character actors Richard Jenkins and Bradley Whitford, and even though we’re not sure of what their purpose is in the movie (I pretty much figured it out, mostly because the foreshadowing led me there, not because I’m that smart) we appreciate the bond among them and their associates- here guided by cynicism and greed, but accompanied by some sharply funny dialogue and go-for-broke performances. (A tall, dark-haired actress does appear to Tell Us What It All Means, and it is not a lull in the action, but another step leading to the climax.)

That’s about all I can tell you, seriously, without giving away the whole enchilada. Even if you do figure out where this is going, nothing prepares you for the mind-boggling action climax. It is incredibly violent and gory (as we’ve been expected and face it, hoping it to be), but it’s not violent for the sake of violence. The maelstrom that occurs does serve the purposes of the plot-and we feel an inescapable sense of dread as we approach it- but it is not just a glorified gorefest. It is exciting. We never lose track of the story or the characters, and we are constantly in doubt about how everything is going to turn out. As for the ending, as they say…I didn’t see that coming.

The movie does great work with its low budget, and by low budget I mean $30 million. And nowadays, folks, that is considered a low budget. John Carter, by comparison was an estimated $250 million. It is easy to see that the bulk of that money must have gone to the dazzling (and terrifying) special effects, which the movie wisely bring in gradually, rather than having them screaming for our attention and begging us not to leave the theater. Actually, the opening credits kind of do that. Trust me.

The Cabin in the Woods is not enjoyably cheesy. There is nothing cheesy about it in idea or presentation. It is a good movie if you like horror movies, or might be good to suggest to a friend that is despairing that good ones aren’t being made. Fans of the so-called “Whedonverse” might be the most easily attracted to it, but you certainly don’t have to be a Buffy or Firefly or Dollhouse fan to love this movie. That image on the poster should indicate to most people that this is not going to be what one might expect. Go see it to re-learn the old lessons taught by this subgenre, and maybe some new ones. Like if a crusty old man tells you not to go somewhere, you probably shouldn’t. Or that sex and death are inextricably related. Or that Japanese kids are smarter than any other kids in the world.

Previous articleNational Day of Silence: ‘Make It Stop’ by Rise Against (Video)
Next articleSign A Marijuana Reform Petition On 4/20