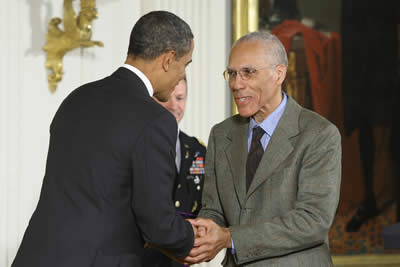 It was the second straight year that an NMSP artist has received the National Medal of Art, the highest award given to artists and arts patrons by the United States Government. In 2011, President Obama awarded the medal to Mark di Suvero, whose towering “Yes! For Lady Day” at the NMSP is recognized as a landmark of contemporary sculpture.

The National Medal of Arts is a White House initiative managed by the National Endowment for the Arts. Each year, the NEA organizes and oversees the medal nomination process and notifies artists of their selection to receive a medal.

Bodark Arc was commissioned by NMSP and the GSU Foundation, and installed in 1982. Puryear used a number of materials to create the artwork, including earth, wood, Osage orange trees, asphalt, stone, and cast bronze. Bodark Arc is an example of Land Art, so large that it can by fully appreciated only by viewing it from the air. In Bodark Arc, Puryear orchestrates landscape and scale along with personal and cultural references, offering a site for quiet reflection that reveals itself piece by piece.