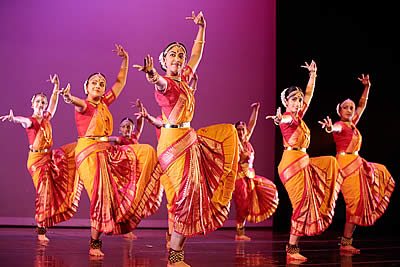 In its stunning exhibition of classical Indian dance, “Shakti Chakra – the Energy Cycle,” Natya Dance Theatre examines powerful forces that have been central to the human experience since the dawn of time.

“Shakti Chakra – the Energy Cycle” is coming to Governors State University Center for Performing Arts for one performance only, at 8 p.m., Saturday, February 16.

Hailed by The New York Times as, “admirably precise… animated… sensual… exceptional… triumphant… daring,” audiences and critics worldwide have recognized the artistic excellence of the Natya Company, founded in 1974 and based in Chicago.

In “Shakti Chakra – the Energy Cycle,” stories from Indian mythology are interpreted through movement and expression in order to explore humanity’s place in the universal cycle of creation. Sections portray the relationships between humanity and divine forces.

“Shakti Chakra – the Energy Cycle” is the third One More Night production during GSU Center’s 2012-2013 season. One More Night brings the best in Chicago theatre, music, and dance to Chicago Southland audiences; Quality performances are always affordable and close to home. The series is funded by a generous grant from The Chicago Community Trust.

Natya Dance Theatre, under the artistic leadership of Hema Rajagopalan, is among the most critically acclaimed and culturally treasured dance companies in the United States. Natya offers profound and subtle expressions of humanity’s deepest questions and values in the context of our present-day lives.

Rooted in Bharata Natyam, one of the great classical dance theater forms of India, Natya preserves and perpetuates Bharata Natyam in all its classical rigor, and moves the art form in innovative directions. Natya’s contemporary interpretations incorporate dynamic body movement, rhythmic footwork, hand gestures and facial expressions to convey meaning and emotion that create “rasa,” the aesthetic experience that transforms the audience.

Ever-increasing accolades follow Natya’s brilliant performances. In 2008, the company performed with cellist Yo-Yo Ma and the Silk Road Ensemble before an audience of 13,000 in Chicago’s Millennium Park. Natya was featured in 2005 in The Chicago Dance Project, a 13-part series produced by PBS, and in 2006 in Arts Across Illinois CenterStage on WTTW Channel 11. Nationally and internationally, the company has performed at Lincoln Center for the Performing Arts in New York City, the Kennedy Center for the Performing Arts in Washington, D.C., Ravinia Festival, the Avignon Festival in France, and the Music and Dance Festival in Madras, India.

Tickets for “Shakti Chakra – the Energy Cycle” are $30 and $10 for students, with 10 percent savings for seniors and 20 percent savings for groups of 10 or more. To purchase tickets, or for further information, contact the GSU Center box office at www.centertickets.net or (708) 235-2222. The box office is open Monday through Saturday from 10 a.m. to 4 p.m. and two hours prior to performances. Student discounts are only available by phone or in person and require a valid school ID.