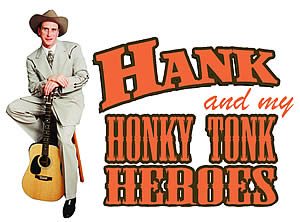 Park Forest, IL-(ENEWSPF)- Hank Williams is known the world over as the most influential singer/songwriter ever. Now, acclaimed performer/musician and Middle Tennessee native Jason Petty, along with his four piece band, is bringing the authentic and insightful story of Hank Williams Sr. to life in Hank and My Honky Tonk Heroes for a special presentation at Freedom Hall in Park Forest, Illinois on March 23 at 7:30 p.m.

Jason Petty made a striking impression on New York’s Theatre District, starring in ‘Hank Williams: Lost Highway,’ which played to sold out audiences at the Little Shubert Theater. Audiences and critics alike were taken back by Petty’s amazing acting ability in his portrayal of Hank Williams.

Petty won rave reviews from all the major critics, including the New York Times, Variety and Rolling Stone. The NY Post sated it best, “At times it seems as if Petty is not just offering an impersonation of Williams, but channeling his ghost.” Another sign of recognition for Petty’s brilliant performance of Hank Williams was being honored with an Obie Award for “Outstanding Actor”.

In Hank and My Honky Tonk Heroes, Petty gives a personal look at Williams growing up, how he became famous, who influenced the legendary singer songwriter and performers today who are influenced by Williams.

Backed by a four-piece band, just like Williams performed, the show is chock full of Hank’s hits from ‘Your Cheatin’ Heart’ and ‘I’m So Lonesome I Could Cry’, to ‘Hey Good Lookin’ and ‘Lovesick Blues’.  Not only will the great songs of Hank Williams Sr. be performed but the audience will also hear a selection of songs from some of Hank’s influences and those who were influenced by Hank including "Will the Circle Be Unbroken "Wine Me Up" and "Midnight in Montgomery” and many more. Hank and My Honky Tonk Heroes will have audiences clapping their hands and stomping their feet

Concert tickets are $24 and available by calling the Freedom Hall box office at 708-747-0580 or by going online at www.freedomhall.org   Freedom Hall is located at 410 Lakewood Boulevard, Park Forest, IL.