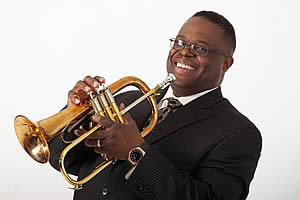 University Park, IL-(ENEWSPF)- Orbert Davis’ monumental score, “Music from DuSable to Obama,” will be presented in concert at Governors State University Center for Performing Arts for one performance only, on Sunday, March 10, at 4 p.m.

Trumpet virtuoso Davis will lead the Chicago Jazz Philharmonic Chamber Ensemble in an unforgettable presentation of the Emmy-winning music from the 2010 WTTW documentary “DuSable to Obama: Chicago’s Black Metropolis.” The performance, which incorporates jazz and classical techniques, integrates video highlights from the documentary to tell its tale of Chicago’s uniquely African American history.

Davis’ highly-acclaimed score is a tribute to the resilience and contributions of African Americans as they helped build Chicago into one of the world’s great cities. His music celebrates moments great and small in the city’s history – from the founding of Chicago by Jean Baptiste Point DuSable to the 20th century Great Migration to the election of the nation’s first black president, Chicago’s own Barack Obama.

Davis is also Clinical Associate Professor in UIC’s Department of Theatre and Music at the University of Illinois at Chicago. One of Chicago’s busiest and most sought-after musicians, Chicago Magazine has named Orbert Davis “Y2k Best Trumpeter in Chicago” and “Chicagoan of the Year for 2002.” Davis, who was born in Chicago and grew up in Momence, has a bachelor’s degree in trumpet performance from DePaul University and a master’s degree in Jazz Pedagogy from Northwestern University.

“Music from DuSable to Obama” is the fourth and final One More Night production during GSU Center’s 2012-2013 season. One More Night brings the best in Chicago theatre, music, and dance to Chicago Southland audiences; Quality performances are always affordable and close to home. The series is funded by a generous grant from The Chicago Community Trust.

Tickets for “Music from DuSable to Obama” are $30 and $10 for students, with 10 percent savings for seniors and 20 percent savings for groups of 10 or more. To purchase tickets, or for further information, contact the GSU Center box office at www.centertickets.net or (708) 235-2222. The box office is open Monday through Saturday from 10 a.m. to 4 p.m. and two hours prior to performances. Student discounts are only available by phone or in person and require a valid school ID.