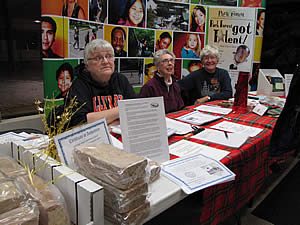 Park Forest, IL–(ENEWSPF)– The Park Forest Historical Society this year celebrates a quarter century of saving the past for the future. On Sunday, January 30, 2011, the Historical Society will hold a luncheon, program and reception to celebrate the 25th Anniversary of its founding. The luncheon will be held at 1:30 p.m. at Dining on the Green, 349 Main Street in Park Forest. Donation to attend the event is $25.00. Reservations and the donation are due by January 18, 2011. The invitation can be printed from the society website at www.parkforesthistory.org, or the donation can be paid online, and the reservation made by calling Therese Goodrich, Chairman of the luncheon, at 708-748-7672. Anyone not having access to the Internet should call Ms. Goodrich.

The program will include speakers Neal Ney, Administrative Librarian for the Park Forest Public Library in 1985; Jane Nicoll, co-founder and Archivist of the society; and Magne B. Olson, President Emeritus. Beverly Myrow’s Harp Angels will play, and slides of photographs the society has helped preserve and of programs presented over 25 years will be shown. Photographs and documents from programs and projects of the society over its first 25 years will be on display.

The Park Forest Historical society was founded as a committee of the Friends of the Park Forest Public Library at a meeting on January 30, 1985, making the date of the luncheon the actual 26th Anniversary of the society. Judge Henry X. Dietch proposed the society to Neal Ney, head of the Park Forest Library in November 1984. In 1987, the society incorporated as an independent not for profit and in 1989 obtained 501 (c) (3) status.

The society was formed to support the Park Forest Local History Collection and Archive which had been started by library staff in 1981, and to keep Park Forest history alive. Five to six public programs have been held each year on the history of the village or related topics. In 1989, Philip M. Klutznick was inducted into the Park Forest Hall of Fame which the society turned into an annual event in 1994, now with more than 100 members. Biographies of inductees can be read in the Local History Files at the Park Forest Public Library and on the society website. The 2011 Hall of Fame will be held on April 3, 2011 at Freedom Hall, 410 Lakewood Blvd.

The new challenge faced by the society is to find a permanent home for the Park Forest Local History Collection and Archive, the bulk of which has been in remote storage since January 2007. The society has research materials on hand, and most of the photograph collection at the museum. The Local History File and several books and scrapbooks are currently in the collection of the Park Forest Public Library.

The society has recently been in the news for its sale of Marshall Field’s Park Forest Store bricks. Bricks are still available at 1 for $15; 2 for $25.

In November 2010, the Park Forest Historical Society and Jane Nicoll were presented with 25th Anniversary and 25 Years of Service Awards by the Illinois Association of Museums. The awards committee found the accomplishments and dedication of both through the years impressive.

The mission of the Park Forest Historical Society is: To preserve, interpret, and celebrate the unique history, diversity and achievements of the Village of Park Forest, Illinois through exhibits, publications, and special programs; To educate residents, students and visitors, in all aspects of the village history; To promote and support historical research; To encourage donations, and enlist volunteers for the Park Forest Local History Collection and Archive and the 1950s Park Forest House Museum; and To honor those who have contributed to our community over a long period of time.

More information on the anniversary, the work of the society, and the museum, along with volunteer opportunities are available on the society Web site. For more information contact Michael Gans, Society President at parkforesthistory3 at yahoo.com, or by phone at 708-305-3308.