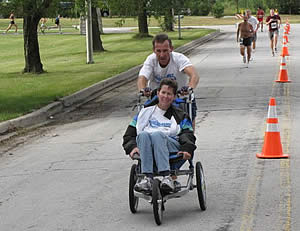 A runner at the three mile mark with his wife. (Photo: Gary Kopycinski)

Newer runners as well as seasoned runners, including members of running clubs from Evanston, Elmhurst and Oak Park took to the course.

eNews Park Forest a number of Facebook photo galleries in this related story: Photographs from the 2010 Park Forest Scenic 5 and More

For a complete listing of results, go here. The Village of Park Forest has photos from the race on its Facebook page.

Also as part of the Scenic 5 and more, two heats were held for kids ages 2-5 and 6-12. Scores of youth raced down Orchard Drive – all finishing as winners.  Other participants took part in a 5k walk of the Central Park Wetlands, a food fest, as well as pool activities at the Park Forest Aqua Center.

Related: Photographs from the 2010 Park Forest Scenic 5 and More