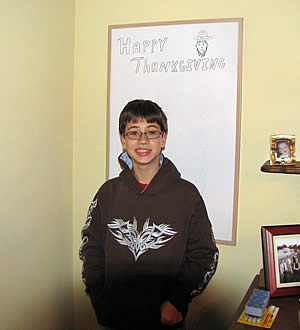 Quinn Kirchner, 13, of Park Forest is ready for his third season with the Joffrey Ballet. (Photo: Gary Kopycinski)

Park Forest, IL-(ENEWSPF)- Park Forester Quinn Kirchner is set to take the stage at the Joffrey Ballet for the third year in a row with this season’s production of Piotr llyich Tchaikovsky’s The Nutcracker. The 13-year-old home schooled youth began pre-dance studies at age 5 with Miss Carol Hutchison, and continues studying dance with Miss Hutchison today.

"I like just being able to dance," Mr. Kirchner reflects. "I just like it. I just like leaping into the air and turning fast in circles."

His earliest performance was at age 2, a "Dance With Me," but he doesn’t consider that to have been ballet.

His involvement with the Joffrey Ballet began three years ago when he did Indiana Youth Ballet and then decided to try out for the Joffrey. He auditioned successfully, and has continued each year since. All told, he has played Boy 1, Boy 2, and this year, he will play Boy 5. Locally, he performs at Freedom Hall in late spring or early summer with his instructor and classes.

Quinn’s father Colin says there are two casts of children, a Red and Green cast, each with about 50 children per cast. Of all the scenes in the Nutcracker, Quinn says he enjoys the party scene the most, or the epic battle between the rats and soldiers.

What’s it like for a 13-year-old to be on stage? "It’s not really scary when I went on," he recalls, "Some of the stuff is falling apart because they’ve used the props a lot. I’m really close up so I can see all the details and everything. I see how some stuff works, like how the Christmas tree grows."

It is quite an experience being so close to a live orchestra, Quinn says. "At first, I thought about falling into the orchestra pit. I wasn’t exactly afraid, but I thought it might happen, or something."

He says the music is "really good. It’s a real privilege to have a live orchestra."

Besides ballet, Quinn enjoys spending time with his friends, playing soccer, piano, spending time at the Park Forest Library, and reading from his Amazon Kindle. At this point, he’s planning on being a Chemical Engineer "of some sort" when he grows up. A few years ago he attended a "chemical camp" at Northwestern University. He says he is intrigued by "the chemicals, the elements, the properties, isotopes, etc. How they react with each other, using polymers to build up new chemicals, designed for a certain purpose."

Mr. Kirchner plans on many leaps in the future.

Choreography for the 2012 production of The Nutcracker is by Robert Joffrey and Gerald Arpino, with live music performed by the Chicago Philharmonic. Performances run from Friday, December 7, through Thursday, December 27, at the Auditorium Theatre of Roosevelt University, 50 E Congress Pkwy.

For more information on this year’s production, and to purchase tickets, click on the image below: 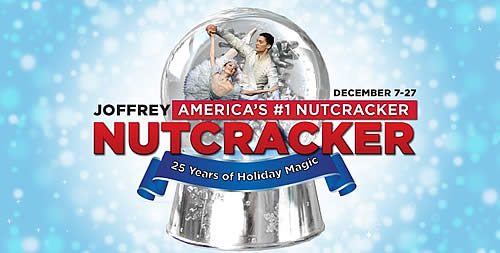