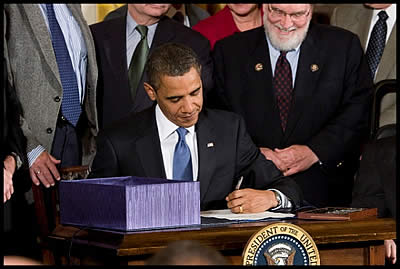 “This law honors our lesbian, gay, bisexual and transgender brothers and sisters whose lives were cut short because of hate,” said Human Rights Campaign President Joe Solmonese. “Today’s signing of the first major piece of civil rights legislation to protect LGBT Americans represents a historic milestone in the inevitable march towards equality. Although this is a major step in fighting the scourge of hate violence, it is not the end of the road. As a community, we will continue to dedicate ourselves to changing not only laws but also hearts and minds. We know that hate crimes not only harm individuals, but they terrorize entire communities. After more than a decade of advocacy, local police and sheriffs’ departments now have the full resources of the Justice Department available to them.”

“We applaud President Obama for signing this bill into law and thank the leadership and our allies in the House and Senate. We also will always remember the tireless efforts of Senator Edward Kennedy on this issue. Senator Kennedy once said that this legislation sends ‘a message about freedom and equality that will resonate around the world.’ This marks the first time that we as a nation have explicitly protected the LGBT community in the law. And this law sends a loud message that perpetrators of hate violence against anyone will be brought to justice,” said Solmonese.

“We are incredibly grateful to Congress and the president for taking this step forward on behalf of hate crime victims and their families, especially given the continuing attacks on people simply for living their lives openly and honestly,” said Judy Shepard, executive director of the Matthew Shepard Foundation. “But each of us can and must do much more to ensure true equality for all Americans.”

“We appreciate everyone who worked so hard on this bill. My son was taken at such an early age and we hope this law will help prevent other families from going through what we experienced,” said Stella Byrd, mother of James Byrd. “Even though we’re different colors and different sexual orientations or gender identities, God made us all and he loves us all.”

The new law also provides the Justice Department with the ability to aid state and local jurisdictions either by lending assistance or, where local authorities are unwilling or unable, by taking the lead in investigations and prosecutions of violent crime resulting in death or serious bodily injury that were motivated by bias. It also makes grants available to state and local communities to combat violent crimes committed by juveniles, train law enforcement officers, or to assist in state and local investigations and prosecutions of bias motivated crimes.

This legislation was first introduced in the 105th Congress. There have been 14 total votes in the U.S. House and U.S. Senate to bring this historic legislation to the president’s desk.

The Human Rights Campaign is America’s largest civil rights organization working to achieve lesbian, gay, bisexual and transgender equality. By inspiring and engaging all Americans, HRC strives to end discrimination against LGBT citizens and realize a nation that achieves fundamental fairness and equality for all.