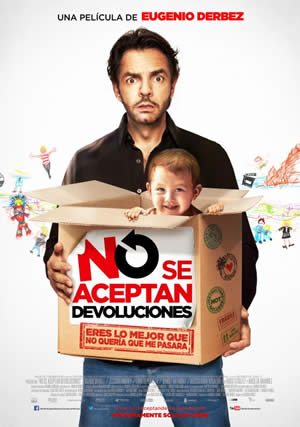 OK. If I were reviewing this movie as The Regular Guy (the nom de plum of Chicago radio announcer Marty Lennartz when he’s reviewing movies for WXRT-FM; he does a mean Northwest Side uhduh City aaac-cent), I would probably start out saying that, “I t’ought dis would be a remake uh *batteries not included, about da old couple who get help against evil real estate developers from some aliens. No, my friends, as it happens…”

Or something like that. I don’t know if he’s reviewed it or not. First, I have to say that I am shamefully ignorant of Mexican cinema (outside of seeing a little bit of, say, Sabado Gigante!). I absolutely adore Pan’s Labyrinth, but that’s a movie directed by a very talented Mexican, filmed and set in Spain. I did enjoy the comic stylings of Cantinflas in Around the World in Eighty Days (1956). Instructions Not Included (an apt title, but the actual translation of the Spanish title, No Returns Allowed, probably does it more justice) starts off as a comedy with farcical turns, but allows a substantial amount of darkness to enter as the film progresses.

We are introduced to the story by Johnny Bravo, a famous Acapulco cliff-diver, performing rituals with his eight-year-old son, Valentin, meant to rid the boy of fear. Bravo has him anthropomorphize fear when exposed to spiders, to heights, to sleeping in a mausoleum- into wolves, which Valentin can then chase away with a growl. Sometimes it works, sometimes it doesn’t. Those wolves make several appearances in the movie, taking the form of fears that Valentin didn’t know he had.

After a falling out with his father (probably over his questionable parenting methods), Valentin goes out on his own, ultimately becoming the biggest, most hedonistic, mooochingiest, not-paying-attention-to-the-rules-of-safe-sex-at-all-ingnest playboy in Acapulco.  And the luckiest, too. The movie uses amusing montages to show the multiplicity of drop-dead gorgeous women he beds (through my limited viewing experiences, I have learned that you will always find incredibly beautiful women in Mexican movies. Or Mexican soaps. Or Mexican commercials. Or Mexican news broadcasts.), and he’s the lucky one, because he is homely. Somehow, he has cast a spell over all these women! And hey, it’s not like he has any money.

This acting sleight-of-hand is performed by Eugenio Derbez, a beloved Mexican movie and TV star (comparable, I’ve been told, to Robin Williams) who has the putty face, the wide, lightning-quick eyes, killer timing and a damn-the-torpedoes approach to immersing himself in a comic situation. He is also a good enough actor reflect the change his character goes through in the movie. And change he must. (Thankfully, one of those changes is appearance.)

One afternoon, Valentin is roused from sleep (with, uh, multiple partners) by Julie, a young American woman who has with her baby daughter, Maggie. After much mental exercise, Valentin (who doesn’t understand English, even though Julie speaks Spanish) realizes that Maggie is his child, and after he gives Julie $10 to pay the cab and waits for her return…and waits…and is abandoned by his partners…and waits, he realizes that he is stuck with the little girl. He races to the airport to track the woman down, misses her, and when he discovers that she is going to Los Angeles, he sets out (on foot!) to find her, with Maggie in tow.

While in Los Angeles, Valentin rescues his daughter from danger, and the way that he does this solvers the problem of a Hollywood producer, and Valentin gets a (very) high-paying job. Soon he and Maggie (who through another amusing montage) grows to the age of six, and the two live very comfortably together as father and daughter. Maggie becomes her father’s “manager,” (he still doesn’t know English), and at this time I was waiting for the Kramer contra Kramer moment to arrive, where the daughter will be taken away…

It gets even darker, and here I was wondering how a Mexican audience might appreciate this element in a largely humorous movie. I had also been wondering, all along, if a Latin audience would forgive some of the often funny but occasionally very obvious jokes. Since Derbez, the clown, is showing his more serious acting chops here, the clown role goes to a friend, Sammy (Sammy Perez) whose not-right-in-the-head routine was a bit much for me.

At any rate, the combination of Derbez and Loreto Peralta (in her first movie!) as Maggie is irresistible, and makes the movie, in spite of its schmaltz and schlock, worth seeing. She’s a smart kid, and yes, plays the mom-to-a-man-child role here, but deftly, forming great chemistry with Derbez. Valentin makes their apartment an amusement park wonderland (the apartment has custom-made doors that match their heights), and writes “letters from Mom,” making Julie come across as the world’s greatest philanthropist and explorer. Another genuinely clever montage is used when Julie reads these letters aloud- you’ll wish you had spent more time on those arts-and-crafts projects in grammar school. Both the environment and the lie, of course, come under serious scrutiny by others.

(I have a great disdain for the portrayal of most “smart” kids on TV, because they frequently come across as the only ones who know everything about everything at their tender age. Jae Head in The Blind Side is, I believe, the worst offender; Chloe Grace Moritz’s Rachel in (500) Days of Summer is so obviously not a creature of this earth that I forgive her. And she’s funny. But Peralta, I do have to give her props, right along with Derbez.

Two other roles come across as mostly human. Julie, Valentin’s erstwhile “forever lover,” as played by Jessica Lindsey, is not the total bitch that she could be, though her motives seem a bit cloudy to me at a key point of the movie. Daniel Raymont, as Valentin’s closest friend, a Hollywood producer, does the standard yelling-over-the-cell-phone thing we seem to associate with Hollywood producers, but Raymont leavens the portrayal with care and affection for his friend, so it seems real. I enjoyed the fact that both characters were bilingual and spoke Spanish in such an unaffected manner.

It will be interesting to see what The Regular Guy has to say about this movie. On the one hand he’ll probably find the humor sometimes lacking, and the plot way too familiar, but he might admit that it’s well-paced (until we get to the third act), and that the Derbez-Peralta duo is a winner. At least dat’s what I t’ink.

BTW: In my last review, I said that James Marsden played Prince Charming in Charmed. What was I thinking? He was in Enchanted. Oh, and one other thing. INI is in subtitled Spanish with a very generous helping of scenes in English. I believe subtitles preserve the inflection of the non-English speaking actors, which is sometimes more important, as I’m sure you know, than words themselves. There was, however, one scene where the white subtitles were on a white background, and I didn’t realize they were there fast enough, and I misunderstood part of what was going on in the second half of the movie. So do pay attention.

Bernie Jablonski was an extraordinary teacher of Mass Media and Film Study in the Fine Arts Department at Marian Catholic High School. He currently tutors students through Jablonski Tutoring.