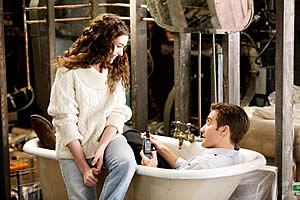 Love & Other Drugs is three-quarters of a revelatory, transcendent movie about relationships. I suppose it’s also a totally revelatory movie about the development of Viagra, which I might’ve guessed had I paid more attention to the “other drugs” part of the title (or the movie’s previews). The film’s beginning has some fairly familiar stereotypes and situations, the middle is a wonderfully insightful sequence about two people who think it smart not to fall in love (but do), and its conclusion again leaves us in rather familiar territory. It is the sharp writing and genuine performances of Anne Hathaway and Jake Gyllenhall, however, that forgive the movie of its lapses and make it something any lover of adult romantic comedies must see.

And it’s about time we had a good adult romantic comedy. Romance and comedy are two genres that I have high (or maybe just odd) standards for. For the former, the journey of the couple has to honestly hold up to my perception of the “reality” of living through a relationship, and the resolution has to be satisfying to me, as well, which is where this movie didn’t totally work for me. And don’t get me started about current comedies. With so many people holding The Hangover up as the gold standard (too slow, too long, Tasers aren’t funny), and with previews for comedies focusing on the scatological, very few movies (that mean to be) strike me as essentially funny. Most of Love & Other Drugs, though, compared well in my mind to movies like Annie Hall, Something’s Gotta Give, or even Dave.

A mixed bag, to be sure, but I told you my ideas on this subject were a bit odd.

The movie is based on Hard Sell: The Evolution of a Viagra Salesman, a non-fiction work by Jamie Reidy. I know nothing of this book, so I can’t tell you if it’s “inspired by” or is at least a partial replication of this man’s life (and to my friends who know how I struggle with double entendres, don’t worry- I get it). Actually, it’s helpful in watching the movie if you forget that part, because it almost comes totally out of left field. We’re introduced to “high-end stereo equipment” salesman Jamie Randall, the proverbial hotshot who does his very best to get himself fired- even as women are begging for his number as he’s walking out the door.

Since we’re still in the familiar and obvious part of the movie, the next obligatory scene, naturally, is the one where Jamie is at dinner with his incredibly rich and successful parents (played by George Segal and the late, lamented Jill Clayburgh), younger brother and moneyed IT geek Josh (Josh Gad- like Zach Galifianakis but easier to withstand for more than ten minutes at a time) and sister and doctor Helen (the late, somewhat lamented Rubicon’s Natalie Gold, whom we would have cheerfully endured more than ten minutes of in this movie). The family is together to enjoy each other’s company and celebrate how well-off they are, when the troll-like Josh (replete with a Barbie Doll wife whose figure is ready to implode on itself) giggles out between mouthfuls of food that Jamie has lost his job. After the initial non-amazement, the same evil imp of a brother suggests that Jamie seek a job in pharmaceutical sales, which is “the only (job market) where entry-level positions are $100,000 a year.” (Editor’s note- Seriously?)

Josh, armed with his easy charm and ability to schmooze (to say nothing of his talent for sleeping with anything in a proverbial skirt) does his best to promote Zoloft, and soon finds him on the brink of the sexual revolution that is Viagra. Before he gets to that point, though, He meets strong-yet-a-bit-depressed Maggie Murdock in a doctor’s office. I don’t think I picked up exactly what her “situation” is from the commercials, so let me not bring it up now. There have been scads of movies that have dealt with this type of thing, and the movie stays high above the clichés for most of its running time. At any rate, Josh pursues Maggie with his irresistible charm, sustains some physical injury, and then, in a magical scene in a restaurant, begins a totally absorbing and hopeful relationship that makes up the soaring bulk of the movie.

It’s here where the movie really sings. A strictly sexual relationship starts wearing down into something else, and just about nothing in this sequence seems clichéd. To say that Hathaway and Gyllenhall have astounding chemistry with each other suggests that there are constant fireworks erupting on the screen, but it’s not like that at all. Instead, we are absorbed into an utterly credible, relatable romance (with two admittedly beautiful people) that did have me doing things like holding my breath and muttering advice to them under my breath. The writing also makes the uncertain progress of the relationship believable, with the two characters making decisions of how invested they are based on what seems endemic to their personalities, rather than the needs of the script (until, as I’ve said, near the end of the movie, but I’m sure I’ll get arguments about that).

In reporting my experience of the movie to you, there is much in my memory that is secondary to Jamie and Maggie’s relationship. We do get a view of the universe of pharmaceutical sales, and how much of it is true, who can say? (The guy who wrote the book, obviously- can anyone come back with a report?) We also have a lot of fun (for the most part) watching Jamie work as a seducer, realizing that he’s met his match in Maggie.

Even though Segal and Clayburgh are there mostly to help establish Gyllenhall’s character, I certainly wouldn’t have minded seeing more of them in the movie. Josh Gad’s character appears through most of the movie, and though he is there for comic relief (can you have comic relief in a comedy?), his presence is welcome, even though we have another case of casting from the Dustin Hoffman–Tom Cruise-as-brothers school. (One marvels though, at how much Jake Gyllenhall is on the road to looking like George Segal in his later years.) Oliver Platt does his usual best friend schtick as Gyllenhall’s trainer (saving his best scene for last) and Hank Azaria, sans accent, is smarmy without being one-dimensional as a doctor.

Love & Other Drugs was directed by Edward Zwick, whom I always associated with adult romantic comedies, until I found out that About Last Night … was his only movie in the genre (he is also closely connected with the TV series thirtysomething.) Indeed, most of his movies are close to being action movies, but with great emphasis on characterization: Blood Diamond, The Last Samurai, Defiance, and Courage Under Fire, among others. If you’re trying to persuade a friend to see this movie and that person is resisting you because he (most likely) thinks this will be a “chick flick,” please remind him of that.