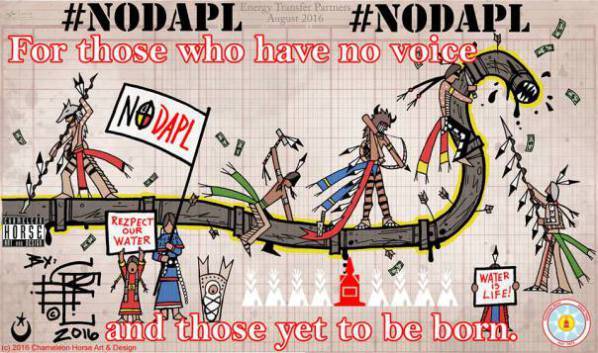 CHICAGO –(ENEWSPF)–February 3, 2017 — Native Water Protectors and their allies will move in prayer and unity on Saturday as they answer a call for solidarity from the frontlines of Standing Rock, where the struggle to stop the Dakota Access Pipeline has entered its eleventh hour. Water protectors and supporters will gather at 1:00 PM on Saturday, February 4th in downtown Chicago at Daley Plaza, 50 West Washington St.

The indigenous resistance against the Dakota Access Pipeline has called for emergency solidarity actions across the world. From the threat that the Army Corps will approve the DAPL easement, to the attack on indigenous sovereignty, to ongoing ecocide and climate crisis, we recognize this is a time of great urgency as we respond to this call.

We will assemble in Power and push back against the Trump regime, the fossil fuel industry and big finance.

The City of Seattle stands poised to pull $3 billion out of Wells-Fargo on Monday, as part of the larger #DivestDAPL campaign. We call on cities around the country — including Chicago — to divest from this pipeline, and others like it. Illinois Water Protectors reject the reckless conduct of the Trump administration, and will fight to uphold native sovereignty, self-determination and treaty rights, and to dismantle colonially-imposed borders.