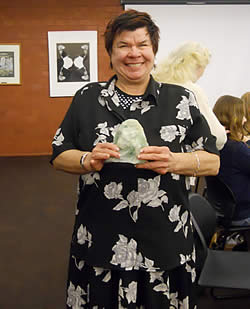 The club’s business portion included election of officers for 2011.

The club’s members voted unanimously to hold the 2011 SSESC Fossil, Gem, Mineral and Jewelry Show the weekend of October 15th and 16th.  There are plans to offer new children’s activities and more hands on family fun.

On Sunday, February 13, 2011 the club will hold their annual SSES Silent Auction held at Freedom Hall from 1:00 to 4:00 p.m. Both events are free and open to the public. Items in the Silent Auction include minerals, fossils, jewelry, an original 1929 six book set titled, The Library of Pioneering and Woodcraft by Earnest Thompson Seton. Mr. Seton is remembered as a famous outdoorsman, painter, and story teller plus helped start the Boys Scouts of America.