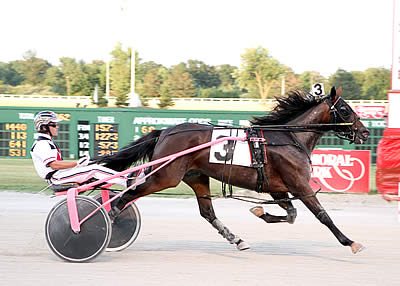 Zumba Mouse completely destroyed a field of three-year-old trotting fillies as she rolled to a nine length triumph for Marcus Miller in the first of two Fox Valley Evita Stake eliminations. (PHOTO SUPPLIED)

Crete, IL-(ENEWSPF)- After some very impressive efforts by the youngsters in Saturday’s Southland Festival of Racing elimination’s at Balmoral Park the preliminary action continued on Sunday night with three-year-old trotting fillies battling in a pair of Fox Valley Evita Stake eliminations. State-bred sophomore pacing fillies were also in action as field of 10 met in $7,000 Ann Vonian Stake elimination.

With a total of 16 diagonally gaited three-year-old fillies entered for the Fox Valley Evita Stake a pair of $7,000 preliminaries were contested. The top five ladies in each division will be back next week for the $50,000 final.

In the opening split 1-5 favorite Zumba Mouse rallied from seventh at the half-mile mark to win by a whopping nine lengths in 1:57.1 with driver Marcus Miller at the controls.

Reserved through the early stages while Drinks On Me (Dave Magee) led the field through splits of 28.3, 57.3 & 1:27.3 Zumba Mouse finally moved into the outer flow heading around the final bend.

Still sitting sixth as the field turned for home the daughter of Armbro Tropicana-Tootie Mouse, who had been campaigning on the east coast, the Erv Miller trainee unleashed a 28.3 final quarter picking off one rival after another in route to the romping victory. My Funky Farkle (Dale Hiteman) enjoyed a second over journey but could not match strides with the winner and was forced to settle for the bridesmaid role while Powerfulconnection (Brian Carpenter) finished a distant third. Also gaining spots in the final were Skyline Happy and Drinks On Me.

Under the watchful eye of Miller Zumba Mouse who was unraced as a two-year-old now has three wins in six career starts for the partnership of Miller, Cox and Reynolds.

The heavy favorite also rolled to an easy win in the second division as Ron Marino and David Hermann’s Fox Valley Ruffian, the 1-2 choice of the wagering public cruised to a five-length victory in 1:59.0 for driver Kyle Husted.

After getting away third as Jesse Wyoming (John Roberts) led the field through an opening quarter in 30.1 Husted moved last week’s Hanover Stake winner to front as the field trotted down the backstretch.

Leading the way through pedestrian middle splits of 1:00.3 & 1:31.2 the Randy Tuftie trained miss sprinted away from her rivals with a 27.3 final quarter to post her third win 10 starts this season. Maplegrove Shaelyn (Jamaica Patton), a 68-1 outsider rallied from far back to finish second while Jesse Wyoming wound up third. Also gaining spots in the final were Bonnie’s Star and Look At That Chick.  My Miss Caroline, the probable post time favorite, was scratched from her second straight start due to sickness.

A field of 10 sophomore pacing fillies were sent to battle in the $7,000 Ann Vonian Stake elimination with the top eight finishers joining Fox Valley Touche and Cuzimademymindup in next week’s $50,500 Final.

Continuing her mid-season surge Just By Design, who was fresh off a win over open company in a Hanover Stake last week, toted home top honors as she reported home with a three-quarter-length front stepping score in 1:53.0 under the guidance of the red-hot Kyle Wilfong.

Floated away from post position seven by Wilfong the roan daughter of Sportsmaster-Rock N Roan was parked in fourth as She’s Automatic (John Roberts) led the field through an opening quarter in a brisk 27.2.

Continuing to grind her way to the front the Mike Brink trainee grabbed control of the proceedings on the backstretch leading the way through fractions of 56.1 and 1:24.4.

After putting away a first over bid from 7-5 favorite Pardon, who was making her first start on the local scene after spending two months competing on the east coast, Just By Design continued to hold her rivals at bay as she sped under the wire with her fourth win in nine starts this season for the partnership of Brink, R. D. Poppleton & J. David Carter. She’s Automatic finished second while Mystical MJ (Marcus Miller) was third. Also gaining spots in the final were Let’s Go Higher, Elisa’s Model, Pardon, Mikki Mack and Little Maeve.