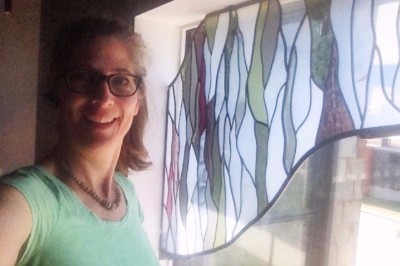 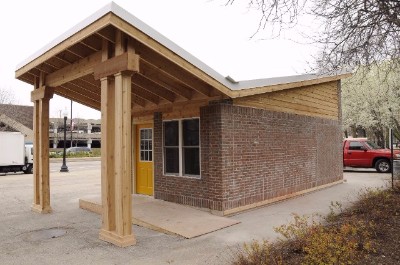 CHICAGO —(ENEWSPF)–June 10, 2016.   Solstice Stained Glass in Chicago is announcing a design competition for window displays in the winning entry of the recent Tiny Home Design competition.

Solstice Stained Glass, founded by Emily Carlson 25 years ago, will host a free solstice celebration Thursday, June 23, 2010 W. Fulton St., 6-8 p.m., in Chicago’s West Loop. Competition entries will be showcased at the event, and winners will be announced by Carlson’s team of judges.

There are five window positions available for designs of the tiny home. Three are east-facing, and two are west-facing. The dimensions are available by emailing [email protected], and appointments are encouraged to see the actual windows. Entrants can either bring the actual stained glass to the solstice event June 23, or they can bring actual-size, colored-in designs. Winning entrants will have to be ready for mounting by June 30.

The winning entry of the tiny home design competition was on display at April’s Tiny Home Summit hosted by Pride Action Tank and Polk Bros. Foundation at the University of Illinois-Chicago. The model, built by Price Construction, will be re-built on a lot donated by The Resurrection Project in Back of the Yards on Chicago’s Southwest Side. The model, approximately 330 square feet, will be on display and available for tours starting in July.

Carlson and Carmen Noriega, construction manager for The Resurrection Project, came up with the idea for a stained glass competition. “I think it is a great way to continue the focus on tiny homes as a solution to the affordable housing and homeless crises in Chicago,” said Noriega, a stained glass artist and tiny home aficionado. “Tiny homes can be beautiful and dignified, and provide a great space to live for many populations. There are many creative professionals in Chicago who want to help lend their talents to solving our city’s major problems.”

The Stained Glass Competition will be a quick-turnaround project, aimed to be put in place in the model prior to two national stained glass conferences in Chicago in July. “This collaboration is not only intended to raise awareness of some pretty neat organizations, but to really demonstrate that ‘even’ a small house can and should be afforded those personal touches that make a house a home,” said Carlson. “By offering custom stained glass as window treatments and as interior installations, they touch the human element and what homes are about.”

In 2014, Solstice’s Carlson launched the annual Chicago Stained Glass Invitational Exhibit. “Two years ago, as the two national organizations were seeking locations to hold their 2016 Annual Summer Conferences, I couldn’t resist the helium balloon syndrome: my hand went up,” Carlson said. “I’m very happy to say that I’m acting as local co-organizer next month, as the Stained Glass Association of America will hold its conference July 5-7 at the Hotel Orrington in Evanston, and the American Glass Guild holds its conference at the Logan Center in Hyde Park from July 9-11. The day in between, on July 8, Solstice is working with them both as we host two bus tours that will feature local stained glass; Edgar Miller will be the focus of one, and Tiffany and the Gilded Age will be the focus of the other.” For tickets see http://americanglassguild.org/bus-tour/ .

The Pride Action Tank, a project of the AIDS Foundation of Chicago, and the Windy City Times, along with lead sponsor Polk Bros. Foundation, joined by UIC’s Gender and Sexuality Center and Alphawood Foundation, were hosts of the Tiny Home Summit.

For information on Solstice Stained Glass, see www.SolsticeStainedGlass.com or call 847-561-4048.

Coverage of the Tiny Home Summit, including videos, is here: http://www.windycitymediagroup.com/lgbt/Winner-announced-for-Chicago-Tiny-Homes-Design-Competition-/54635.html

About Solstice Stained Glass: Owner Emily Carlson has been working with restoration, commission and installation of architectural stained glass since 1999. Trained in the traditional methods of the craft while sub-contracting under the auspices of her own company, Solstice Art Source, Inc., she began her career working as an apprentice for a small studio on Chicago’s North Side. Emily has worked on countless leaded and stained glass windows, ranging from building simple rectangle and diamond lites; full re-glazing and restoration of Victorian era windows; the design, fabrication and installation of original creations; and on-site work including removal, repairs and re-installation of windows at the Yale University Art Gallery and Saieh Hall at the University of Chicago. Based on her initiation of the Annual Chicago Stained Glass Invitational Exhibition, started in 2014, Emily was invited to participate in the First Trans-Atlantic Stained Glass Symposium in April 2016, where she presented her “20×20” slideshow that debuted at Martyr’s Pub as part of PechaKucha.