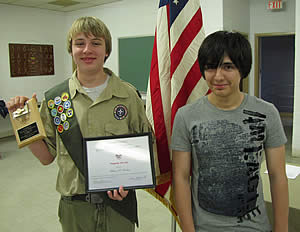 Steger, IL–(ENEWSPF)– Bill Perkins, Park Forest resident and member of Boy Scout Troop 100 of Steger, received an award for heroism Thursday at a ceremony at Immanuel Lutheran Church in Steger.

Mr. Perkins and Mr. Mitchell were out on at 10-mile bike ride on Old Plank Trail when Mitchell hit a "bump" and went flying off his bike, his bike helmet striking the paved path, riding up over his face, and his face and body absorbing the bulk of the crash. Perkins provided his friend with emergency first aid, thanks to his training in the Boy Scouts of America, and phoned quickly for help.

In the video, Perkins describes the incident.

Bill Perkins, Sr., the Scout’s father, expressed his pride in his son’s actions, "I was really proud of what Billy had learned in Scouts and how he had been able to use this for this experience. We can teach skills to these boys, but taking control of a situation like this takes strength, a strength that is learned from the many things he has learned as a Scout."

"All of us have moments in our lives where we are called to action," his father continued. "Scouting helps train us for those moments, and I’m very proud of my son."