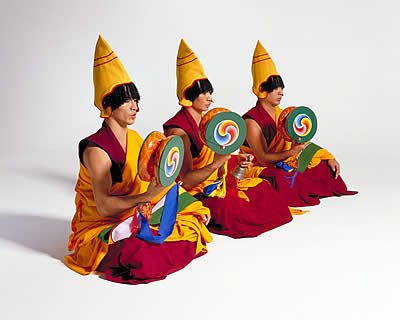 Park Forest, IL-(ENEWSPF)- The famed multiphonic singers of Tibet’s Drepung Loseling Monastery, whose sellout performances in Carnegie Hall and Lincoln Center received national acclaim, will perform Sacred Music Sacred Dance for World Healing in Park Forest as part of their international tour of The Mystical Arts of Tibet. The performance will be held on Saturday, October 19 at 7:30 p.m. at Freedom Hall, reserved tickets are available at $24 per person, $12 per student.

The Mystical Arts of Tibet tour is co-produced by Richard Gere Productions and Drepung Loseling Institute, the North American Seat of Drepung Loseling Monastery, India. Endorsed by His Holiness the Dalai Lama, the tour has three basic purposes: to make a contribution to world peace and healing; to generate a greater awareness of the endangered Tibetan civilization; and to raise support for the Tibetan refugee community in India.

The performance features multiphonic singing, wherein the monks simultaneously intone three notes of a chord. The Drepung Loseling monks are particularly renowned for this unique singing. They also utilize traditional instruments such as 10-foot long dung-chen horns, drums, bells, cymbals and gyaling trumpets. Rich brocade costumes and masked dances, such as the Dance of the Sacred Snow Lion, add to the exotic splendor.

The monks of Drepung Loseling have a very distinguished modern-day musical history. On past tours they have performed with Kitaro, Paul Simon, Philip Glass, Eddie Brickell, Natalie Merchant, Patti Smith, the Beastie Boys, and the Grateful Dead’s Mickey Hart, to name but a few.

In addition, two of their recordings achieved top-10 listings on the New Age charts: Tibetan Sacred Temple Music (Shining Star Productions) and Sacred Tibetan Chants (Music and Arts Program of America, Inc.). Their most recent recording, Compassion (Milennia Music), pairs them with the Abbey of Gethsemani Schola in an encounter of Gregorian chant with Tibetan multiphonic singing. 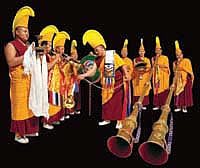 Their music was featured on the Golden Globe-nominated soundtrack of the film Seven Years in Tibet, starring Brad Pitt (Columbia Pictures) and they performed with Philip Glass in Lincoln Center in the live presentation of his award-winning score to the Martin Scorsese film Kundun (Disney), as well as leading prayer ceremonies and meditations in New York and Washington. Organized in conjunction with the Smithsonian Institution, these events were dedicated to the healing and protection of America.

The Loseling monks have twice been featured artists at the Smithsonian Folklife Festival, representing Tibetan culture, and in July 2003 enjoyed the rare honor of representing Tibet in the Cultural Olympiad of Greece, a pre-Olympic celebration of World Sacred Music and Dance. For this event the monks toured Greece and performed at venues that included the Acropolis and ancient Olympia, the historic site of the original Olympics.

Tickets for The Mystical Arts of Tibet are$24($12 for students) and can be purchased at Freedom Hall, by phone at 708/747-0580, or on-line by visiting the website at www.freedomhall.org. Freedom Hall is located at 410 Lakewood Boulevard, Park Forest, IL.