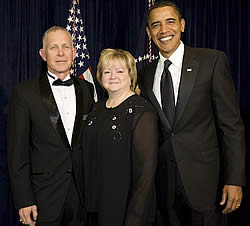 Washington, D.C.–(ENEWSPF)– The Human Rights Campaign, the nation’s largest lesbian, gay, bisexual and transgender (LGBT) civil rights organization, praised the U.S. Senate today for passing the conference report for the FY 2010 Defense Authorization bill by a vote of 68 to 29, sending critical hate crimes legislation to the President’s desk. The U.S. House on October 8 successfully passed the conference report including the hate crimes provision. In July, the Senate voted to attach the Matthew Shepard Hate Crimes Prevention Act to the Defense Authorization measure. President Barack Obama has repeatedly pledged to sign the bill when it reaches his desk. For a retrospective of hate crimes advocacy visit:www.LoveConquersHate.org.

“We’re in the home stretch. This critical piece of legislation is on its way to the President’s desk for his signature,” said Human Rights Campaign President Joe Solmonese. “We look forward to President Obama signing it into law; our nation’s first major piece of civil rights legislation for lesbian, gay, bisexual and transgender people. Too many in our community have been devastated by hate violence. We now can begin the important steps to erasing hate in our country.”

The Defense Authorization conference report removed a provision adopted in the Senate which would make the death penalty available for hate crimes. In addition, the hate crimes provision has been renamed “The Matthew Shepard and James Byrd, Jr. Hate Crimes Prevention Act,” honoring the memory of another victim of hate violence – in the same year as Matthew Shepard – an African-American man who was dragged to death in Jasper, Texas.

“We applaud the leadership of our Senate allies, particularly Senate Majority Leader Harry Reid, and Senators Patrick Leahy, Carl Levin, and Susan Collins for ensuring that the hate crimes provision remained part of this authorization bill. We also recognize the tireless efforts of Senator Ted Kennedy on this issue; a hero for our entire community,” said Solmonese.

The Matthew Shepard and James Byrd, Jr. Hate Crimes Prevention Act gives the Justice Department the power to investigate and prosecute bias-motivated violence where the perpetrator has selected the victim because of the person’s actual or perceived race, color, religion, national origin, gender, sexual orientation, gender identity or disability.

It provides the Justice Department with the ability to aid state and local jurisdictions either by lending assistance or, where local authorities are unwilling or unable, by taking the lead in investigations and prosecutions of violent crime resulting in death or serious bodily injury that were motivated by bias. It also makes grants available to state and local communities to combat violent crimes committed by juveniles, train law enforcement officers, or to assist in state and local investigations and prosecutions of bias motivated crimes.

This legislation was first introduced in the 105th Congress. Today’s vote was the 14th and final time there has been a floor vote on this historic legislation.

The Human Rights Campaign is America’s largest civil rights organization working to achieve lesbian, gay, bisexual and transgender equality. By inspiring and engaging all Americans, HRC strives to end discrimination against LGBT citizens and realize a nation that achieves fundamental fairness and equality for all.