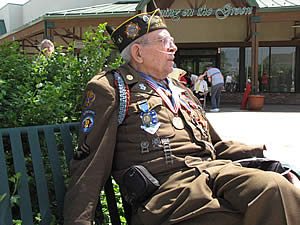 Park Forest, IL–(ENEWSPF)– Veteran Carl Dalke talks with eNews Park Forest about his service during World War II. According to Dalke, who served in the Army’s 100th Infantry Batallion, he once single-handedly took 22 members of the Nazi SS in to custody when he came upon the group meeting. Dalke studied Japanese when he entered the Army and knew German growing up.

After his service, Dalke says he took advantage of the GI Bill, earning three degrees over an eight year period.

Dalke was a regular at Friday and Saturday entertainment events at Changes Bookstore and Coffee House years ago. He has also been a regular for Park Forest’s 4th of July Parade on and off through they years.