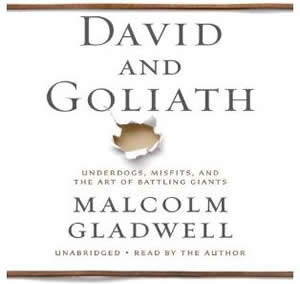 Book Review
By John A. Ostenburg

David and Goliath is the fifth book by Malcolm Gladwell that I’ve read, and once again I am not sure what has captured me the most: his magnificent style of writing or the excellent content of his text.

Gladwell is a longtime staff writer for The New Yorker magazine, a publication that regularly offers readers some of the best prose being written in the English language today. Perhaps Gladwell’s skills as a writer come from his association with the magazine, or maybe The New Yorker only engages writers who are of Gladwell’s caliber. Either way, it is the reader who is beneficiary from what is to be found both in the magazine and in this book.

As has been the case with his previous works, David and Goliath contains a series of vignettes that Gladwell juxtapositions to support the basic premises of his text. In this book, the premise is that what often appears to be a disadvantage actually can be an advantage.

The story from which the book’s title is derived is the first told by Gladwell, but he puts it in  a perspective not generally seen. He explains, for example, that the Israelite shepherd boy who goes up against the Philistines’ giant probably was one of several “slingers” (persons who used slings to send forth projectiles) that made up whole waves of various armies in biblical times. Furthermore, based on historical evidence, Goliath most likely was suffering from poor eyesight and an inability to move with any dexterity. Gladwell maintains that David’s success in bringing down the giant, therefore, is more logical than usually is thought.

From that point forward, the book lays out one story after another of cases where what appears to be a disadvantage – e.g., David’s small size and lack of armanants comporable to what Goliath had in hand – actually can be an advantage. In several of the cases, dyslexia is shown to be a disadvantage that some have used to project themselves into highly successful careers; in others, the loss of a parent in childhood, while causing  great  stress  and  misery  for  the  individual during  youth, leads  to strength and advantage in adulthood.

From my read, I believe the book is all about perceptions, and the fact that the common adage that “perception is reality” just isn’t always the case. A young woman who is a highly successful high school student chooses to go to an elite university because she thinks it will enhance her education, only ultimately to discover that she’s now a little fish in an intellectually huge pond and fails as a result. A British military commander in Northern Ireland thinks he’ll quell the unrest between Catholics and Protestants by imposing massive force, only to discover that his powerful advantage had led the insurgents to greater levels of opposition. The “three-­‐strikes” movement that started in California as a means of deterring crime by putting away offenders for longer periods of time, only proves to create more hardened criminals in the long run. Etc., etc., etc.

Gladwell is not advocating that everyone behave in ways that go against the norm as a means of achieving one’s goals. He does argue, however, that

folks who face adversity often develop very creative ways to counteract that adversity and, in doing so, often achieve greater levels of success than do the rest of us.

His examples of high achievers who suffer from dyslexia are clear illustrations of this point. He writes about David Boies who grew up to be a very successful lawyer, about Gary Cohn who became the president of Goldman Sachs, and about Brian Grazer, a highly successful movie producer. All suffer from dyslexia and had to develop alternatives to reading in order to attain their life goals. All did so, using those new-­‐found skills to propel them much further than they might have ended up had they been able to read as efficiently as all the other kids in their grade school classes.

In other sections of the book, Gladwell shows how going against the norm has resulted in break-­‐ throughs that otherwise would not had occurred. Dr. Emil Freireich’s obstinate personality and proclivity for going against norms led to better ways to treat childhood leukemia. Rev. Wyatt Walker’s use of deceptive imagery during the Civil Rights battles in Birmingham drove Public Safety Commissioner Bull Connor to behave just the way Dr. Martin Luther King Jr. and other movement leaders wanted him to. New York City Police Chief Joanne Jaffe’s distribution of Thanksgiving turkeys to the families of youth with bad criminal records led to a reduction in crime in one of the city’s toughest neighborhoods.

In all cases, Gladwell’s material is well documented and supported with respected research. His content may be controversial in spots, but none can challenge it for its accuracy.

I think Malcolm Gladwell’s idea in writing this book is to show us how we never should accept things for how they are. I’m reminded of the Chinese saying, “The reverse side has a reverse side also.” That’s really what Gladwell is trying to make his reader realize. Yes, dyslexia is a problem, but it also can be an opportunity. Yes, losing a parent is horrible, but it also can awaken some hidden abilities in the sufferer. Yes, enduring great difficulty – such as Londoners did during the repeated German bombing of their city in World War II – is challenging, but it also can pull people together to aid one another and persevere.

As I recall, The Tipping Point was the first Gladwell book I read, followed by Blink, Outliers, and then What the Dog Saw. I enjoyed them all, and now put David and Goliath right beside them on my list of favorites.

John A. Ostenburg is in his fourth four-year term as mayor of Park Forest, Illinois, and formerly served in the Illinois House of Representatives. He retired in July 2010 as the chief of staff for the Chicago Teachers Union after holding various CTU posts over a 15-year period. Recently he was appointed to serve on the newly created Cook County Land Bank Authority. A former newspaper reporter and editor, he also has been a teacher and/or administrator at elementary, secondary, community college, and university levels. E-mail him at [email protected].