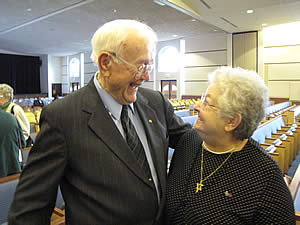 Mrs. Julia Erdely, right, smiles at William R. Gresham, 88, at the May 1 Yom Ha Shoah Holocaust Remembrance Day at Temple Anshe Sholom. PFC Gresham was one of the allied forces who rescued then-16-year-old Julia Erdely from a concentration camp on May 1, 1945. (Photo: Gary Kopycinski)

Olympia Fields, IL-(ENEWSPF)- On May 1, 2011, members of local Jewish communities and members of the public stood together at Temple Anshe Sholom for Yom Ha’Shoah, the annual Holocaust Remembrance Day. This year, the communities remembered the “Forbidden Music,” music composed in the camps, sometimes for the Nazis.

From the program for the event:

Beginning in 1941, the Nazis started to build a camp at Theresienstadt, outsite of Prague, to isolate prominent Chech Jews. Later they added prominent German, Austrian, and Dutch Jews.

In 1943 Danish Jews arrived. Finally, the Danish and Swedish Red Cross organizations began to inquire about conditions at the concentration camps. To show their benevolence, the Nazis decided to let them visit one camp, Theresienstadt. In preparation for the inspection, 7,500 prisoners were shipped east to their death, thus lowering the population.

On June 23, 1944, the Red Cross arrived. The camp had been dressed up with bakers baking bread, workers singing, and a whirlwind of cultural activities. An opera featuring children, Brundibar , was performed. There were four concert orchestras as well as chamber groups and jazz enxembles.

From September 1944 the Nazis transported the Theresienstadt prisoners to the east for execution. Of the 150,000 Jews who entered Theresienstadt, less than 10% survived.

Miraculously (the program continues), some of the music composed at Theresienstadt survived, a selection of which was presented as part of the community program for Yom Ha’Shoah at Temple Anshe Sholom.

During the video, Mrs. Julia Erdely and William R. Gresham, 88, light the first candle in memory of the 6 million Jews who perished. PFC Gresham was one of the allied forces who rescued then-16-year-old Julia Erdely from a concentration camp on May 1, 1945.

“One must always keep in mind that these cultural activities were set against the backdrop of constant hunger,” Rabbi Paul Caplan said of the concerts performed in the concentration camps. “Mental and physical violence, impending disease and pestilence, an uncertain future, random acts of terror, and the prisoners’ lives were always in danger.”