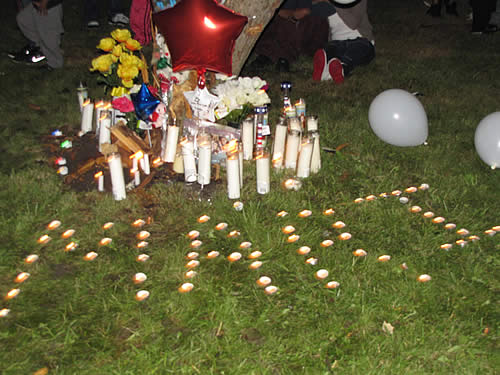 Vigil candles remember one of the deceased. (Photo: Gary Kopycinski)

More pictures from the vigil here.

Park Forest, IL-(ENEWSPF)- The crowd stood at about one hundred, gathering around a broken tree which claimed the lives of two teens early Wednesday morning, the tree glowing in the night from the many, many vigil candles placed around it.

The temperature, a deceptively cool seventy degrees, did not provide comfort with the mugginess following the afternoon’s heat and storms, and mosquitoes having their way with the crowd.

Something so many sought and so few could find.

A victim’s brother, disbelieving, jotting a note on a poster to his deceased sibling.

This was a gathering of the young: teens, young adults, and children, so many children, holding each other, quaking in each others’ arms. There were some adults, but of the many who gathered this night of June 11, it was the young who were forced to grow, to confront the unconscionable.

Just the young, surrounding a broken tree, the scene of two lives lost.

“That’s crazy,” said Taebonie D. of Park Forest. “Just crazy. So many different stories,” she said, referring to the accounts of the crash people were sharing.

Two young girls, about 40 yards east of the main gathering, stood together sobbing on the sidewalk on Algonquin.

“His whole life was basketball,” one of the girls said, referencing one of the victims.

“He was a great person,” the other said. “He was hilarious. He was everything.”

The two walked away, seeking comfort in their tears.