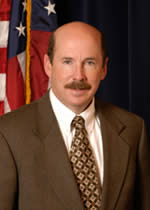 Rep. George Scully Jr. (D) 80th District, has been named chair of the rare Committee of the Whole that will consider the Electric Rate Rollback bill. (Photo: Rep. Scully's office)

Rare Committee of the Whole to Consider Measure Returns Rates to Pre-Jan. 2 Levels and Mandates Rebates with Interest

SPRINGFIELD, IL–(ENEWSPF)– The Illinois House of Representatives will hold a rare Committee of the Whole meeting on Tuesday, February 27 to consider House Bill 1750.  The legislation, introduced Friday, extends the life of the electric rate freeze that expired last month by rolling prices back to their previous levels and requiring utility companies to refund with interest the difference between the old and new rates that they collect from consumers during the period the higher rates are in effect.

Tuesday’s hearing begins at 1:00 p.m. in the House chamber. Legislators are prepared to hear testimony from interested parties for as long as is necessary to let all who wish to speak do so.  Members of the public, business owners and social service agencies that have been affected by higher electric rates are strongly encouraged to attend and share their views with lawmakers.

The committee proceedings will be broadcast on the General Assembly’s website, www.ilga.gov/house/audvid.asp.  Those who cannot make it to the hearing, but would like to ask a question of Ameren or ComEd executives, can call Rep. Scully’s district office at (708) 672-0200.